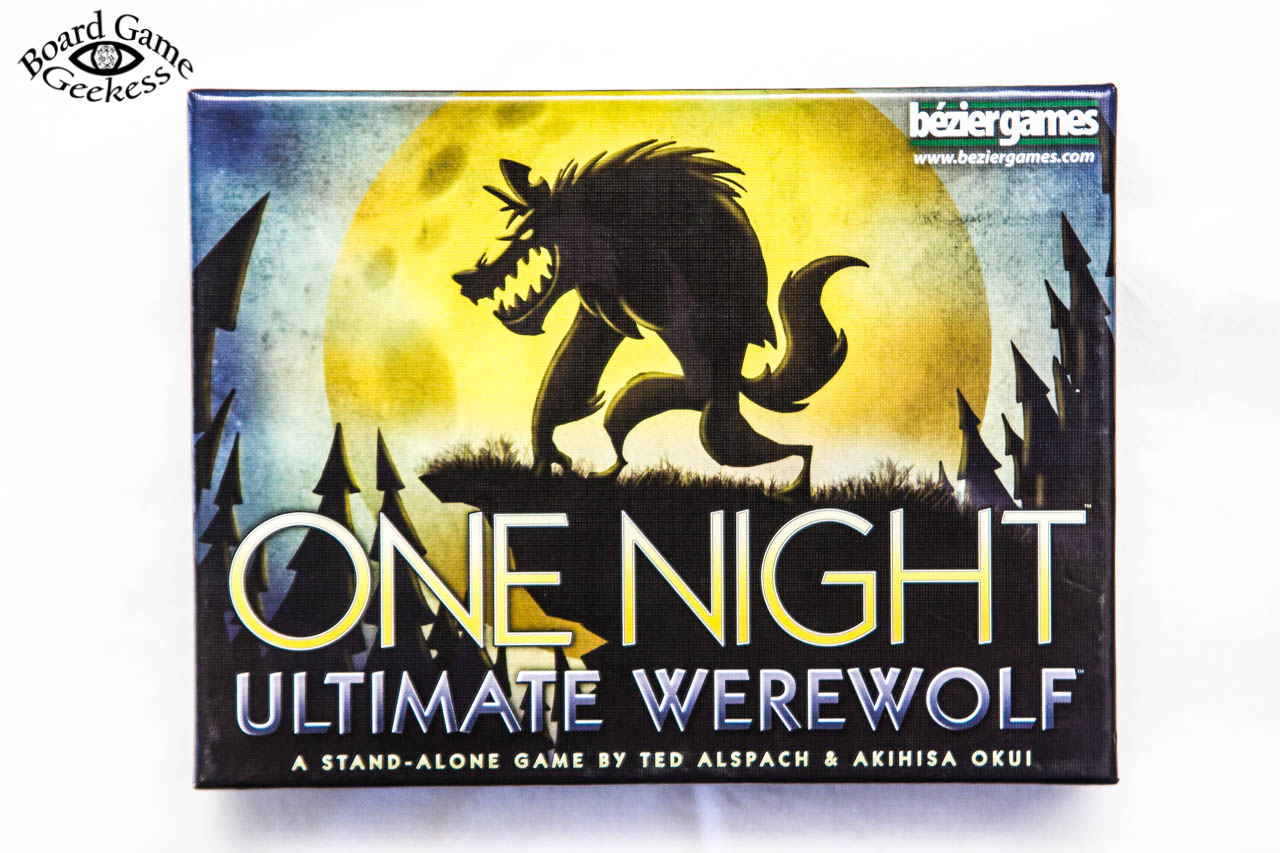 I used to hate traitor games. I used to go out of my way to avoid being a traitor to the point where, in one game, I did the sacrilegious – I actually stopped playing as soon as the cards were dealt because I was the traitor and I knew how terrible I would be at it. It was a terrible decision, and one that I got glared at for the rest of the evening over, but being the traitor just did not work for me. I found it stressful to the point of unpleasantness. So I surprised myself when, after playing a few rounds of One Night, I really started thoroughly enjoying it.

One Night: Ultimate Werewolf is a game based on the idea of Werewolf – where some players are assigned the role of werewolves and the others need to figure out who they are and kill them before they, in turn, are killed and the werewolves win. The beauty of One Night though is that there are a number of roles, all with different actions, and it is played out over the course of ten minutes – you have one round to figure out who is who, what has been done, and where the werewolves are hiding. The villagers’ cause is helped by roles like the Seer and Masons, who get to gather information about the other players, and made all the more difficult by roles like the Robber and the Troublemaker who switch cards around, or the Minion and Tanner who are on suicide missions, never mind those pesky werewolves just waiting to pounce. And then there is the Drunk who actually has no recollection of what he is at all!

I was worried when I bought the game that it was going to be too much like Avalon, since I actually bought a copy of that at the same time, but I was pleasantly surprised to find that the game is very different. Though there are similarities in terms of the traitor mechanic, that the game is played over one round makes it a different beast entirely. The variety of roles and that you can chop and change between them sets it apart and the time limit means that there is little time for bickering, and every modicum of information that you can gather is vital in discovering who the werewolves could be.

The components that are included are pretty simplistic, comprising of sixteen role cards and matching tokens, but the game itself is simple and there isn’t much more that you need to have a really good time with it. A smart phone app has been developed for it, which we found really useful for the period where your eyes are closed, and it solves the ‘problem’ that we were finding in The Resistance of a person’s voice changing when they look up (as the traitor) and then try to return to normal again. This may sound ridiculous, but has actually proven to be a pretty decent detection technique for one of our friends. The app also includes a timer which counts down to the final vote, and the time between the calling out of roles and the count-down to end game can be adjusted as necessary for your group. We found, for example, that in a group of 6 players, we rarely used the whole 10 minutes, and 6 seconds was enough time for each of us to complete our role actions, and we could adjust the timer accordingly. I was confused at first as to the role of the tokens, but after a few games found that they came in very useful for keeping track of who has claimed to be what and who our suspects are.

I found the artwork to be fun and vibrant, and I hate to mention it, but I loved that there were a good number of female characters (four roles are depicted as women, seven are men, and the werewolves are ungendered). It’s just something that a lot of games do overlook, and it just made me appreciate the artwork even more. I liked the simplistic look of the app as well (since I am mentioning it as a really useful tool for the game) and it all works together well. That the box is travel-sized is really useful, though it does bring up one small issue which I will be mentioning under the bad. The setup time is negligible, since all you really need to do is open up the box, pick some roles and, optionally, take out a cellphone. 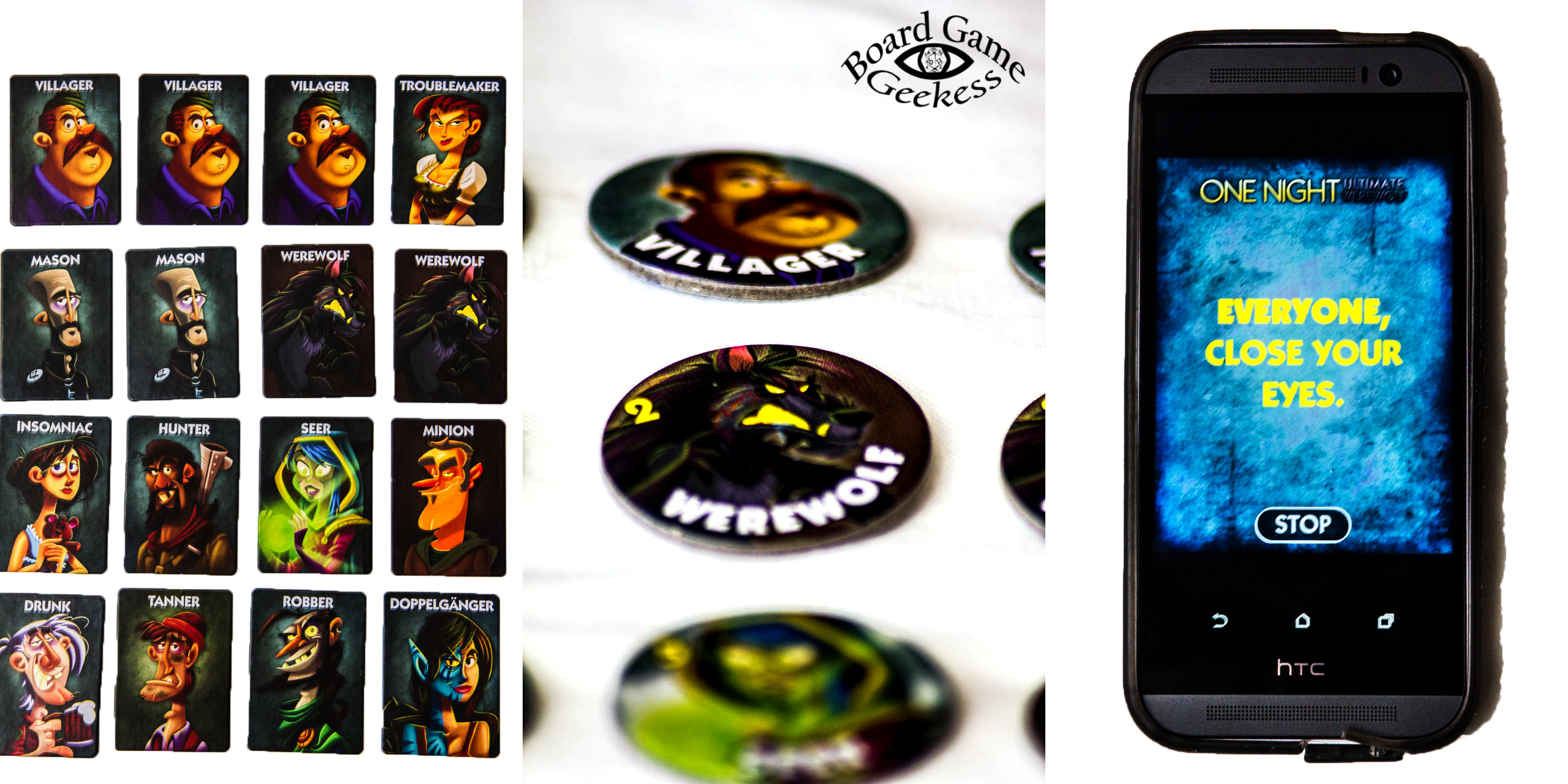 The simplicity and speed with which One Night is played make it one of those addictive table top games that you just have to play over and over and over again, to the extent where the rules suggest playing it as a “championship” where the player who has won most after x number of games wins overall. We played at least 15 times in one sitting just because we were having so much fun with trying out the different role combinations, and we could have easily kept playing well into the night if hunger hadn’t gotten the better of us.

I can think of very little bad with this game in all honesty. There are only two irk’s that I’ve had, and they are helluva minor. The first is the box. It is small, which is wonderful for travelling, but makes it a pain and a half to open. Remember that negligible setup time that I was talking about just two paragraphs ago? Well, most of that setup time is just spent trying to pry the lid open so that you can actually play the game. We have been contemplating ways to fix this, and so far have come up with gluing ribbons to the bottom so that we can just pull it open. We haven’t done so yet, and if anyone has better ideas, I’d love to hear them. I suspect that it may get easier the more we play and the more used the box gets, but it’s still a pain at the moment.

The second “bad” aspect is less of a problem and more of a suggestion, as playing in larger groups can make it quite difficult to perform the role actions without giving away who you are, particularly when your role action involves the switching of cards. We ended up playing on a bar counter-top and standing during the sleeping phase so that there would be no creaking of chairs and no bumping into each other when trying to reach across to switch or look at roles. We also ended up placing the cards into a pattern that would be easy to match so that it wouldn’t be as obvious if one card ended up being a little bit skew, indicating that it was tampered with. 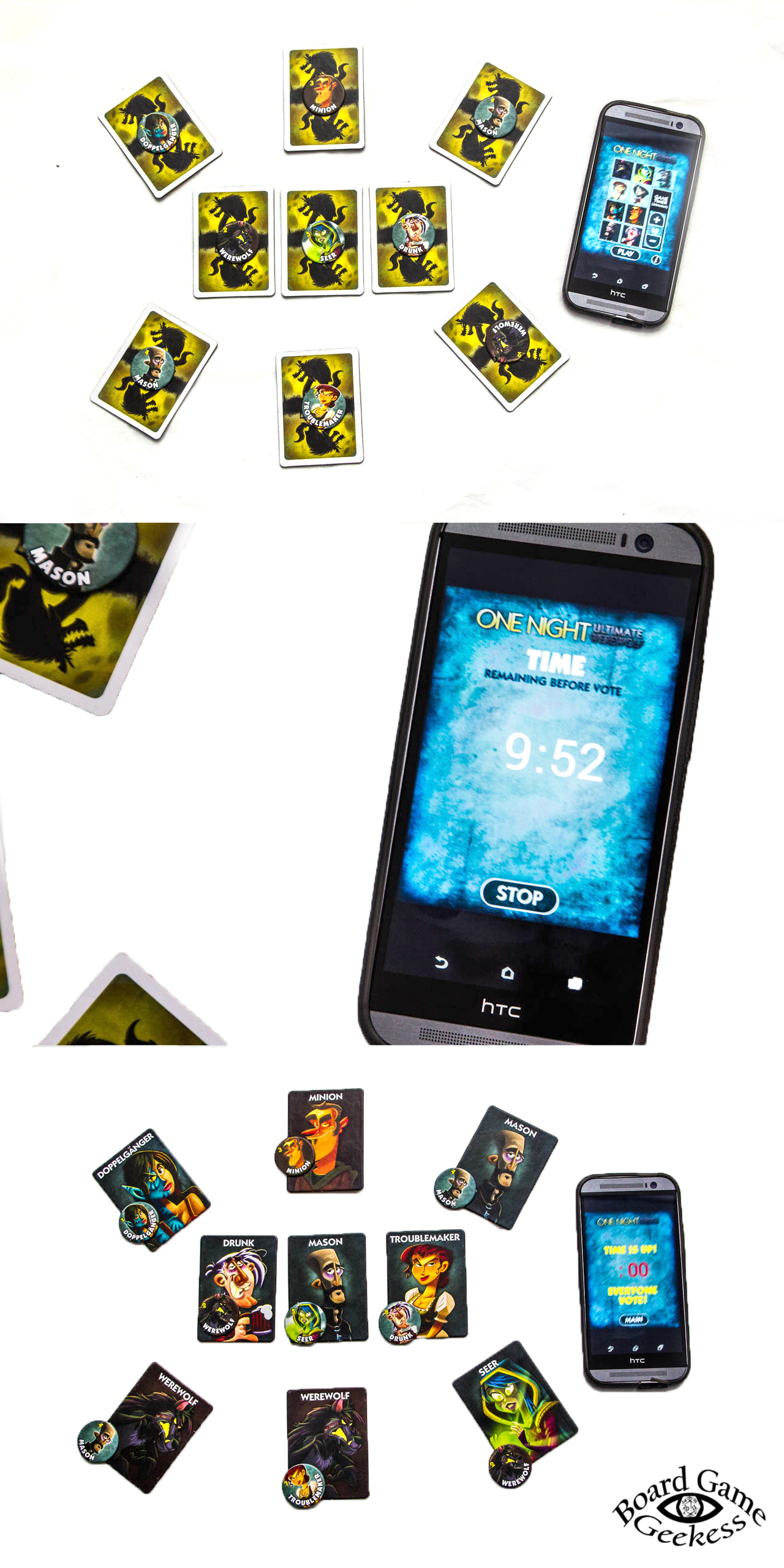 “Everyone: WAKE UP!” A new day has dawned on your picturesque little village and the inhabitants are just now waking up to start the day, but not everyone was sound asleep last night. The Seer was up scrying late into the evening, the mischievous Trouble Maker was out causing havoc, and the Robber was plying his heinous trade in the wee hours of the morning. Much worse than even the most unsavoury of characters, you’ve discovered that there is a werewolf or two in your midsts, and like it or not, you’ll have to work with the rest of the village, even those of disreputable occupations, to track down and kill the werewolf by nightfall. Spend too much time arguing between yourselfs and you’ll surely perish, as one amongst you starts sprouting some hair in some difficult to explain places and develops a taste for very rare steaks.

Each game takes 10 minutes or less and after a brief run through of the general idea, all anyone needs to understand is that they should follow the voice prompts of the person running game to perform their role’s action. This is made all the easier with an optional and very well designed smart phone app that does all the prompting for you, so that everyone is free to play without having to worry about turn orders and what specific roles do what. Everyone starts the game by being assigned a role, each role is well thought out and even roles that have no night actions leave plenty of scope to impact how the game progresses. During the night phase cards will be swapped, traded or peeked at, so that by the end of the night, your role may have changed, and it’s up to you to figure out if you’re still on the same side. You have a limited amount of time to discuss what has happened and determine who is telling the truth and who might be lying. The information gleaned from this is vital to working out who each player has ended up as, and ultimately who will be lynched to secure victory for your side. Once the discussion is over, everyone votes simultaneously to kill someone and the person with the most votes is killed. If the victim is a werewolf, victory goes to the villagers; if not, the villagers are devoured by the werewolves (on a completely unrelated note, if you’re interested in my new cook book Sautéed Settler: 99 Ways To Cook A Villager, I’m now taking pre-orders in the comments).

Never has a game been so well received by such a diverse group of our friends, with several espousing plans to order their own copies after the first session. This really is a fantastic party game and suggestions of one quick game to end off the night tend to result in everyone struggling to keep their eyes open while saying “Just one more”.

In our friend circle, we mostly only get one copy of games – we play together often enough that having more than one copy is unnecessary. With One Night, we’ve decided that all of us need copies to play with students, family and other friends. It goes to show what a fun, social game this is, and I’ve got to agree that it’s a game that deserves to be in every collection, no matter who you’re friends with!