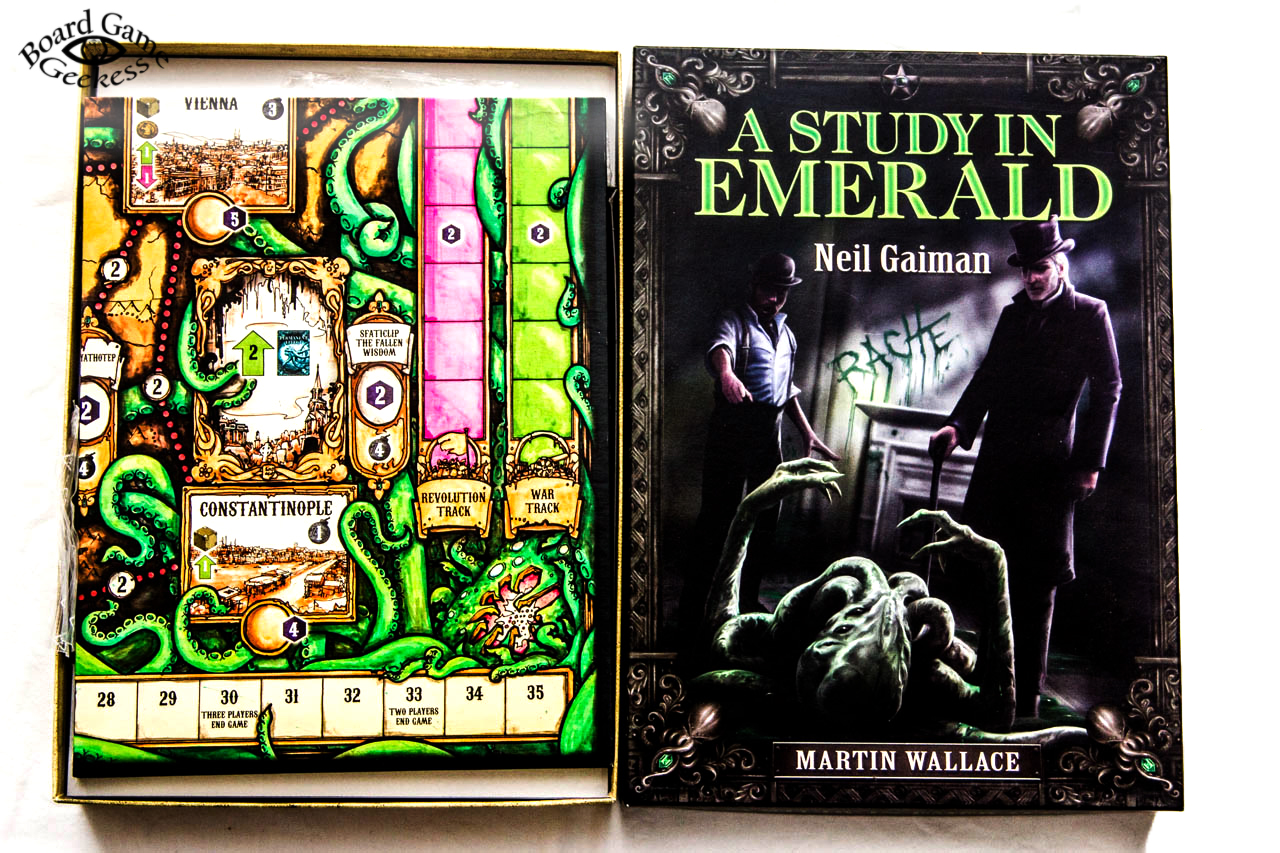 A Study in Dystopia

It is the immensity, I believe. The hugeness of things below. The darkness of dreams.

So starts a wonderful, mind-bending journey into a realm shared by HP Lovecraft and Sir Arthur Conan Doyle in equal measure, and threaded together in a way that only Neil Gaiman could manage in a short story called A Study in Emerald. And when Mr. Geekess found out that the Gaiman short story was being turned into a board game, we were quick to kick-start it, even before our board game addiction had properly kicked in. 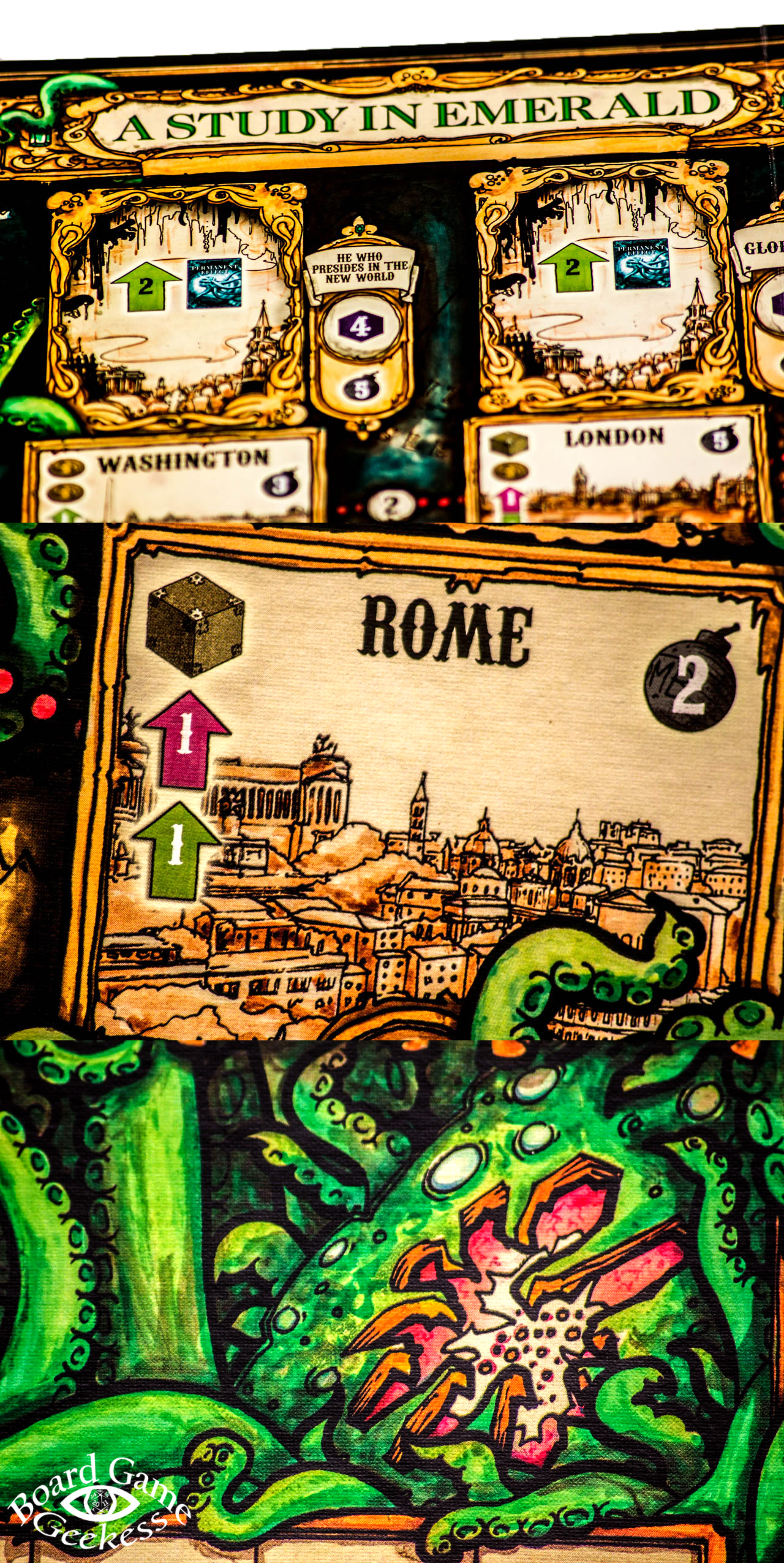 Like Gaiman’s short story, A Study in Emerald is a game that is equal part Doyle and Lovecraft. It is based in time-period of Sherlock Holmes and Professor Moriarty, but it is shared by Elder Gods like Cthulhu. The Elder Gods are considered to be Royalty, and are both revered and protected. But while everyone is aware of their presence, not everyone is happy about the positions of authority that they hold, and the game is split between the Loyalists who continue to trust and protect the Elder Gods, and the Revolutionists who want to see them assassinated and overthrown. Players travel around the world, from city to city, bidding for cities and items (represented by cards) that will further their cause and hiding their allegiance as best they can. A Study in Emerald is the perfect mix of bright and dark, it’s artwork at times jumping out at you and at times being understated. For example, it took countless games and an up-close photo session for me to realise that one of the main Agents is a woman. Which is both surprising and disappointing at the same time, because it shouldn’t be surprising that one of the main characters of a game is female. But I digress. It is mostly black and white or sepia, which colourful touches bringing life to it, and I love it! 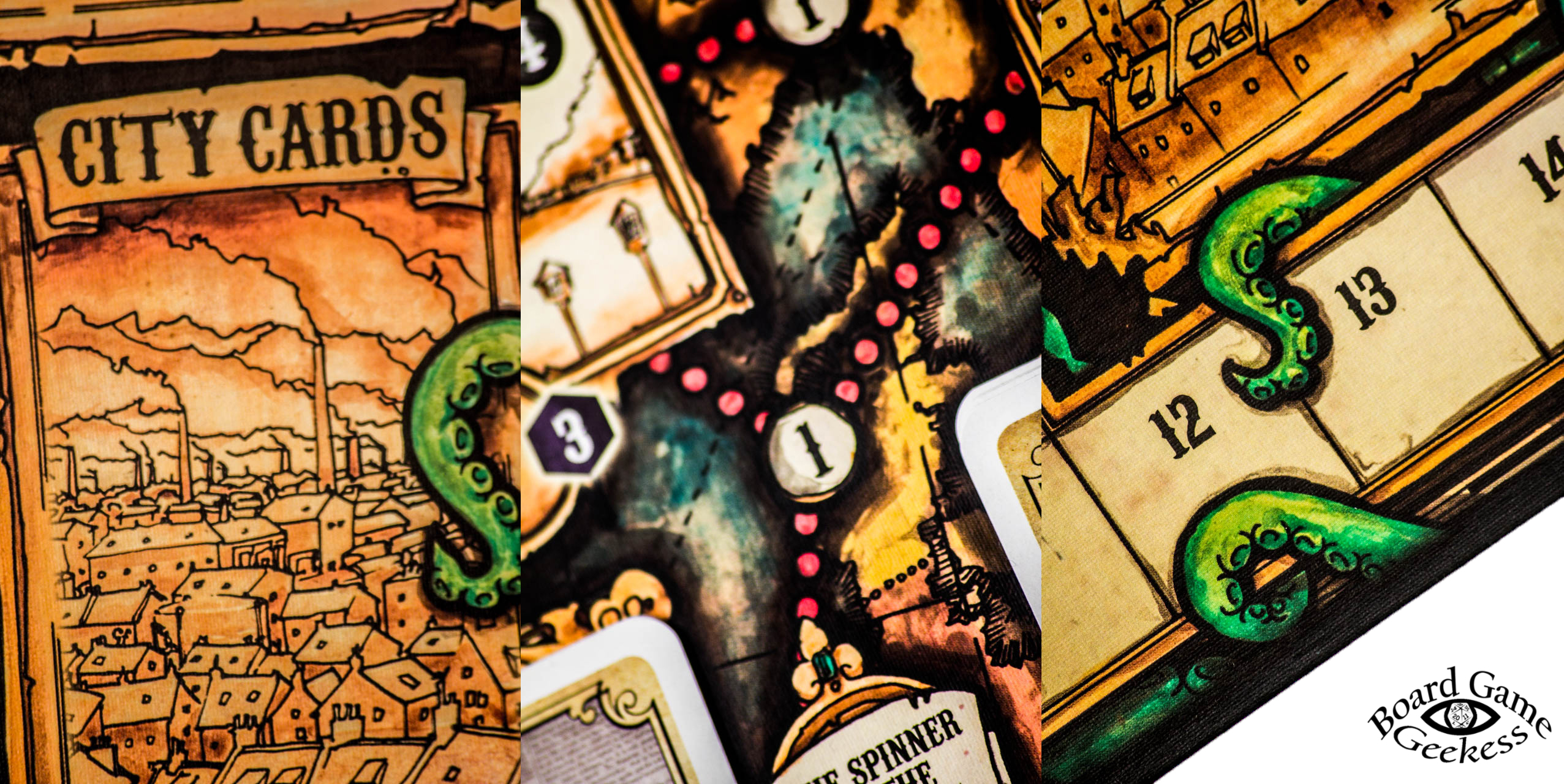 It is the kind of game where winning or losing matters less at the end of the day than how you play the game. And how you play the game could actually see you coming up from behind and winning when everyone thought you had lost! This stems from the beauty of the way that the winner is determined. See, you could be racing ahead, but if someone from your faction is lagging behind, they’ll pull you back with them and the other faction will take the lead. It’s happened on at least one occasion that I’ve won by simply sneaking around the city, taking cards that the other faction would want to have and using them to benefit myself, only to laugh maniacally at the end of the game when someone announces they’ve won, only to find that I’m not actually on their team and can steal the win right from under their noses. 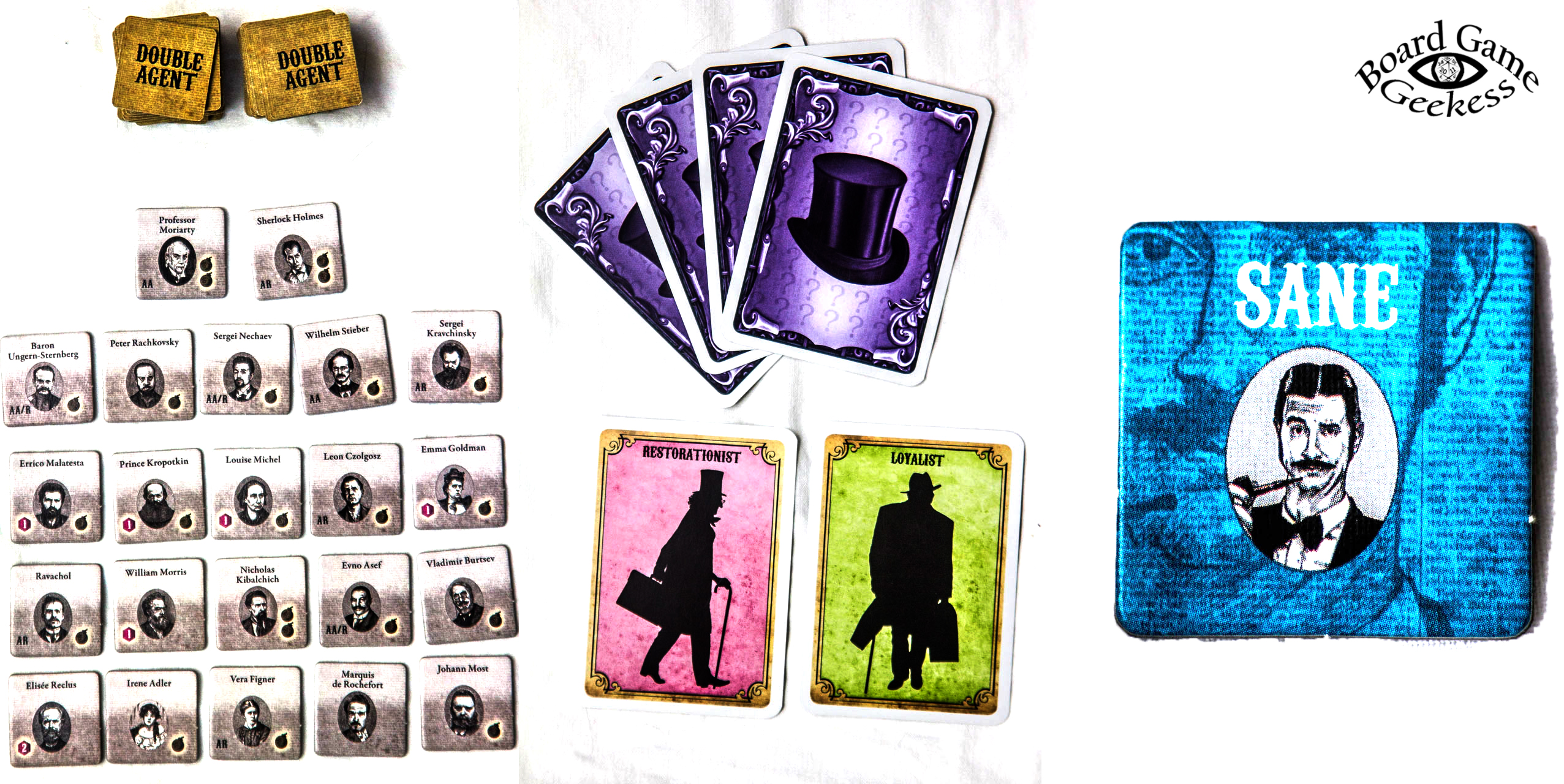 The story lends itself well to game format, and I think that the game does it perfect justice! You feel very much like you are a secret agent with a hidden purpose, and even when you are working together to take down the other side and keeping your own above ahead of them, you’re also thinking of your own end game and how to make sure that you’ll stay ahead without leaving a team member in the dust to be dragged back by. It feels like you’re living a story, and one that you’re at all times both familiar with and estranged from. It’s a wonderful sensation! 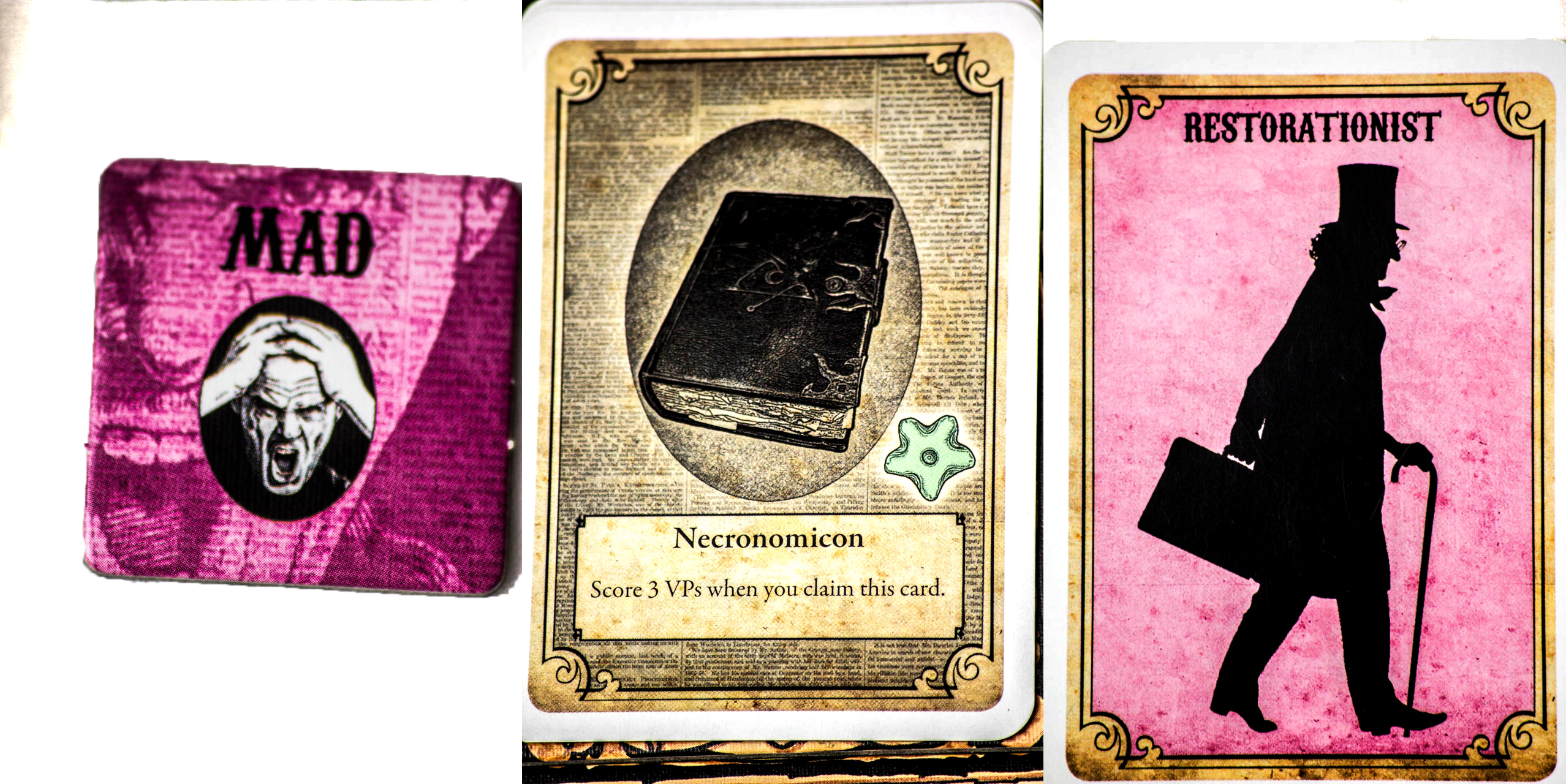 While one friend suggested that the game’s mechanics make it imbalanced in favour of the Loyalists, another suggested exactly the same about the Restorationists, and I think that reflects a well-balanced game, when there could be a chance of either side being a little ahead just because of the decisions that are being made. While you may have more of one side than the playing the game, the win conditions mean that the added member both helps you get ahead, but also has the potential to pull you back should you run ahead without them. Many of the cities benefit the Restorationists more than the Loyalists, and it is a good deal easier to assassinate royalty than it is to hide them, but at the same time the Loyalists have the benefit of not trying to hide (they are considered to be the good guys, after all), while the Restorationists need to either come out immediately or sneak around trying to throw suspicion off themselves. We got our copy of the game when it had just come out, having kick-started it, and this meant that we were susceptible to some beginner errors that may have been worked through before it was properly released. For example, our copy didn’t come with the correct number of components – there were too few influence cubes for some colours, too many for others. We also ended up getting a second copy of the game, which is less of a bad thing and more a side-note) purely by accident because they hadn’t realised that our copy had already been sent and, much as we tried to arrange for it to be returned to the company and redistributed as necessary, it ended up being too costly a mission and we got a second copy which ended up in the hands of some friends who really fell in love with the game. Still, these were errors with the production which may by now have been resolved and an easy fix was made by using pieces from other board games that we own to make up the influence cube shortage. The box contains a lot of components, and the big board means that you need a fairly large play area. Setup can take some time, particularly for players who are less familiar with the game (once or twice is not quite enough to just jump into it) and have to keep checking the rules for setup. And speaking of the rules, they are less intuitive than I would have liked, and to find a particular rule can take anywhere between 2 and 10 minutes if you’re unsure of where to look. As pretty as the board is, it’s also cluttered. There is a lot going on and it can be easy to get distracted or to place an influence cube on a card or city and then forget to claim it until a few rounds later, just because you didn’t see it there. It just becomes too busy to be practical for game play, and it means that the take-down time is longer than normal since you’ll find pieces on the board that you missed after everything else has been put away.

In terms of the game-play itself, there is little bad about the game! I have found that it works wonderfully. It can be slow going at times and it’s not what I would call mindless – you have to concentrate on each move that you make, since your choices affect the cards and choices that you will have available to you later, and you need to weigh up at all times both what is best for you and what your opponent’s next move might be. I can guarantee that it’s not going to be to everyone’s tastes, but it is a great deck-building game that works beautifully with the theme and one that I always thoroughly enjoy playing. It’s not at the top of my list because of how long it takes to setup, play and pack away, but I rarely say no to a game of it!

This was the first, and as of now, only board game that I have kickstarted (though I’ve got my eye on another). A mashup of Sherlock Holmes and Cthulhu mythoses was just too good to pass up, and to top it off it was based on a short story by Neil Gaiman. The game is dripping with flavour, set in an alternative history world where the Old Ones (powerful and horrific deities) have taken over the world and have set themselves up as brutal monarchs. As always, there are those that benefit from the status quo, the Loyalists, who wish to keep the Elder Gods in power, and those that wish to topple the tyrants and bring about revolution, aptly named the Revolutionists. There are various agents out there, including Sherlock Holmes and Professor Moriarty who you need to convince to join your side and work towards your ends.

The game is primarily a deck building game as you travel the world, recruiting agents or collecting magical artifacts to aid you. Each player starts with a deck containing the same cards and a certain number of influence cubes. These influence cubes are at the heart of the game and one of the best mechanics I’ve seen in deck building. You can spend influence to bid on cards, hoping to add them to your deck, but you’ll have to wait a turn to be able to claim any cards where you have the most influence, leaving your opponents free to outbid you in their turn. This can lead to bidding wars which go on for several turns, locking up your influence while other opponents are able to cheaply pick up cards. Once a card is claimed, the winner loses all influence cubes and has to spend actions and cards to reclaim them, while the loser gets all their influence back to start bidding again. Apart from bidding, you can spend actions (with the right cards) to gain more influence, assassinate other agents, offer protection to or even assassinate Elder Gods themselves. Here’s one of my criticisms though, the game just tries to do too much, on top of the already mentioned mechanics, there’s a war and revolution track, a special side deck, sanity tokens (though that’s fitting for a Cthulhu game), zombies and a few other things. It just feels a bit too cluttered, like someone tried to take every idea from a brainstorming session and make it fit into one game. Personally I feel the game would play a lot better with fewer, highly polished elements. Player loyalties are secret, but it feels almost pointless as just about any action you undertake is going to give away your loyalties. I would have liked to see more emphasis on secrecy, which could have been facilitated by small changes such as it not being revealed if you’ve killed an Elder God, or hidden them until the end of the game. Again, it feels like someone decided they needed to have secret identities without working them into the game properly.

A Study in Emerald is not a bad game by any stretch, and is in fact a lot of fun, it’s the all time favourite of a friend of mine and is always the one she wants to play when we get together. The visual design is wonderful and the bidding element is fantastic, but to me it just feels like they’ve tried to do too much. Which is a pity, because there is so much potential for this to be a great game, maybe they’ll make a second edition.

So, this game leaning towards the newer side of the spectrum, have you played it? What do you think, if you have, and would you want to if you haven’t?