So what, you may be asking, is this game that I was so excited to find. Small World is a strategy game where you and up to four of your friends battle it out to occupy as many territories (and defeat as many opponents) on the map as you can. You get gold at the end of each turn for the number of territories you currently control and for any bonuses that your race and your skill give you. The beauty of the game though, and what makes it different from other territory conquering games, is that your race is eventually going to spread itself too thin, and it’s up to you to decide when it’s time to throw in the towel and pick a new race or whether it’s better to stick it out for just one more turn (or two, or three). It’s a small world, after all… and a cut-throat one at that!

I’ve said it before and I’ll say it again, Days of Wonder really knows how to make a beautiful game! The maps are gorgeous and bursting with colour. The art work is the perfect mix of pretty and humorous, and the little details, like the sign in front of the Halflings’ holes in the ground which read: “Trespassers will be shot” or the human on a stick dangling in front of the Dragonmaster’s dragon just add up to make the game look and feel fun, even when you’re at each others’ throats and making death threats (nonchalantly of course). It’s also wonderfully put together in the box, which is something that I appreciate considering that I am usually the one unpacking the game and putting it away again. Everything having its place just feels right, and it’s again something that Days of Wonder are extraordinarily good at.

Moving away from that though, and as you know, that’s a hard thing for me to do, the mechanics of the game are fabulous too. I love that you’ll rarely have a game where the same races will come up and have exactly the same skills as they did before. There are times when you’ll have the perfect mix, like getting Flying Sorcerers (which, let me tell you, actually works a treat), but there will also be times where the races and the skills don’t quite match up, and you’ve got to decide what the best decision for you is. It’s also great that the skills affect how many armies you get, so that even when they don’t quite match up the way that you want them to, they’ve still got a benefit for you to weigh up – do you go with the perfect race-skill combination that gives you fewer numbers, or with the race/skill that affords you the highest numbers to play around with?

I also think it’s fantastic that you don’t end up getting attached to one race throughout the game, and that you need to chop and choose, deciding when it’s right for you to let go and when you need to hold on just that little bit longer. That it can mean the winning or losing of a game indicates what a big part of the game this mechanic is, and I find it wonderful. Knowing when to give up with a particular group can be a huge advantage, and can boost you from the bottom of the ranks to the tops in a matter of rounds.

I am not a fan of stress and conflict, and this game is riddled with it. It can very much be a friendship breaker if you let it – I can recount tales of wars being fought over dice rolls and threats of sleeping on the couch when a particular move is made, but I will leave that all to your imagination. Instead I will tell you that the small world refers to more than just the game, and the outcome of this particular game can easily have real-life repercussions.

It feels like the game is supposed to be short – 10 rounds max. – but it actually takes a lot longer to play than you’d expect. This is because every little move is weighty, and one person’s turn can take quite awhile, particularly if they umm and aah about it, or if something has happened to make them rethink their strategy. So when there are four or five players, all taking their time with their turns, one round can easily end up taking 10-20 minutes, and a full game can easily last over two hours. So, while I really enjoy the game when it starts, by the time it ends, I’m pretty much ready to throw in my gold and call it quits. 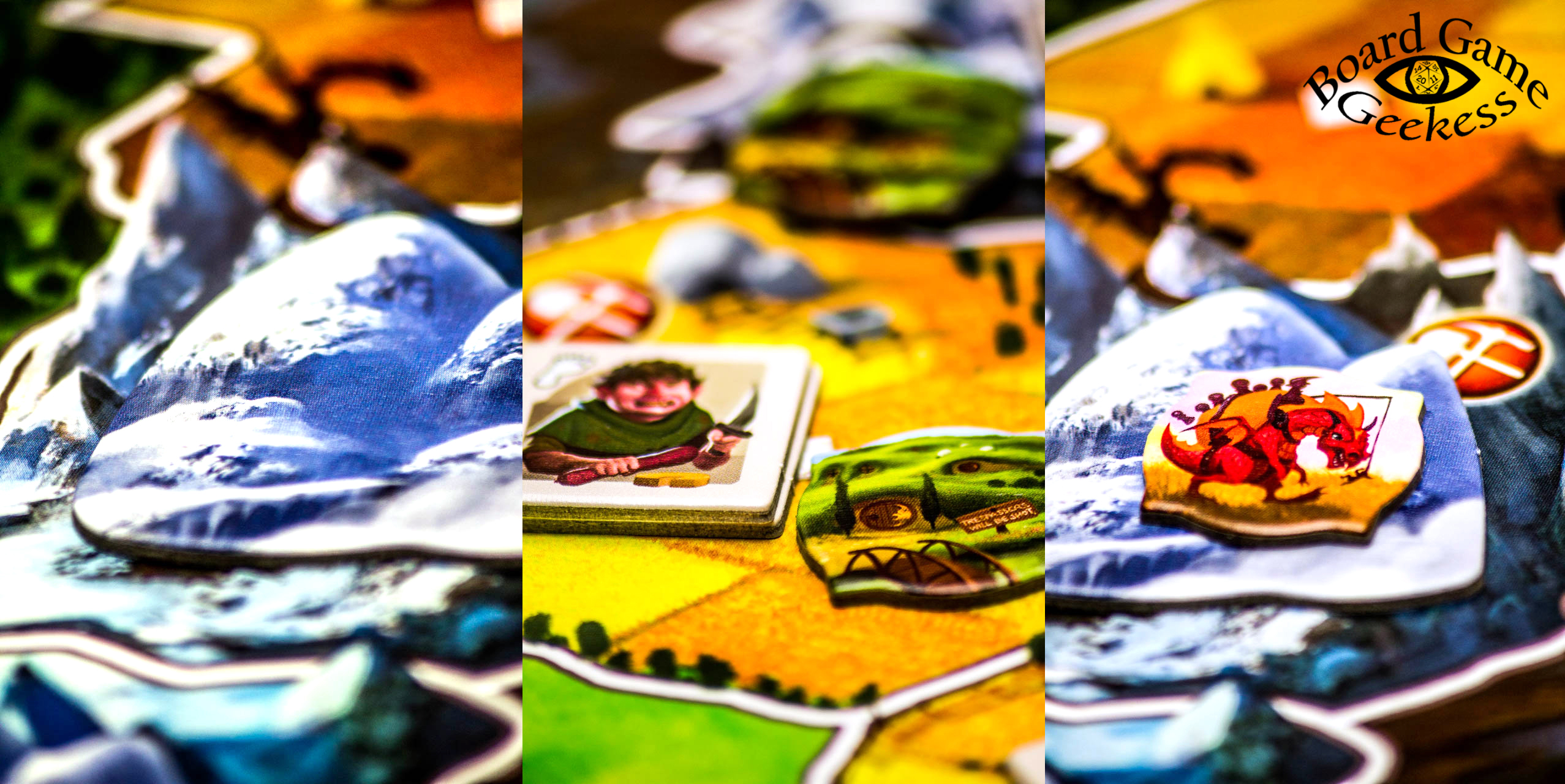 Suffice it to say that if squabbling drive you nuts and you are inadequately equipped to cope with a bit of whining, this may not be the game for you. I have difficulties with both (though it could be said that I’m a hypocrite because I have a tendency to be the one squabbling and whinging on occasion), so Small World is not among my favourites of our collection. That being said, I really REALLY wanted it to be a part of our collection, and there are times when I am in a more forgiving mood that this is my first pick. I just have to be in a really good and patient mood, and it has to be played with the right group of friends…. but then, isn’t that always the case? This was a game that we initially bought as a gift for a friend of ours, and after the first time we played I immediately regretted not keeping it for myself and giving him a fancy bottle of booze instead. As a general rule we don’t buy games that our close friends already own since we have plenty opportunity to play them when we go over for dinner or drinks, though this was a game I was sorely tempted to break the rule for. However when they upped and left the country, I knew I had to get my hands on a copy as soon as I could and our recent trip to Durban presented the perfect opportunity. 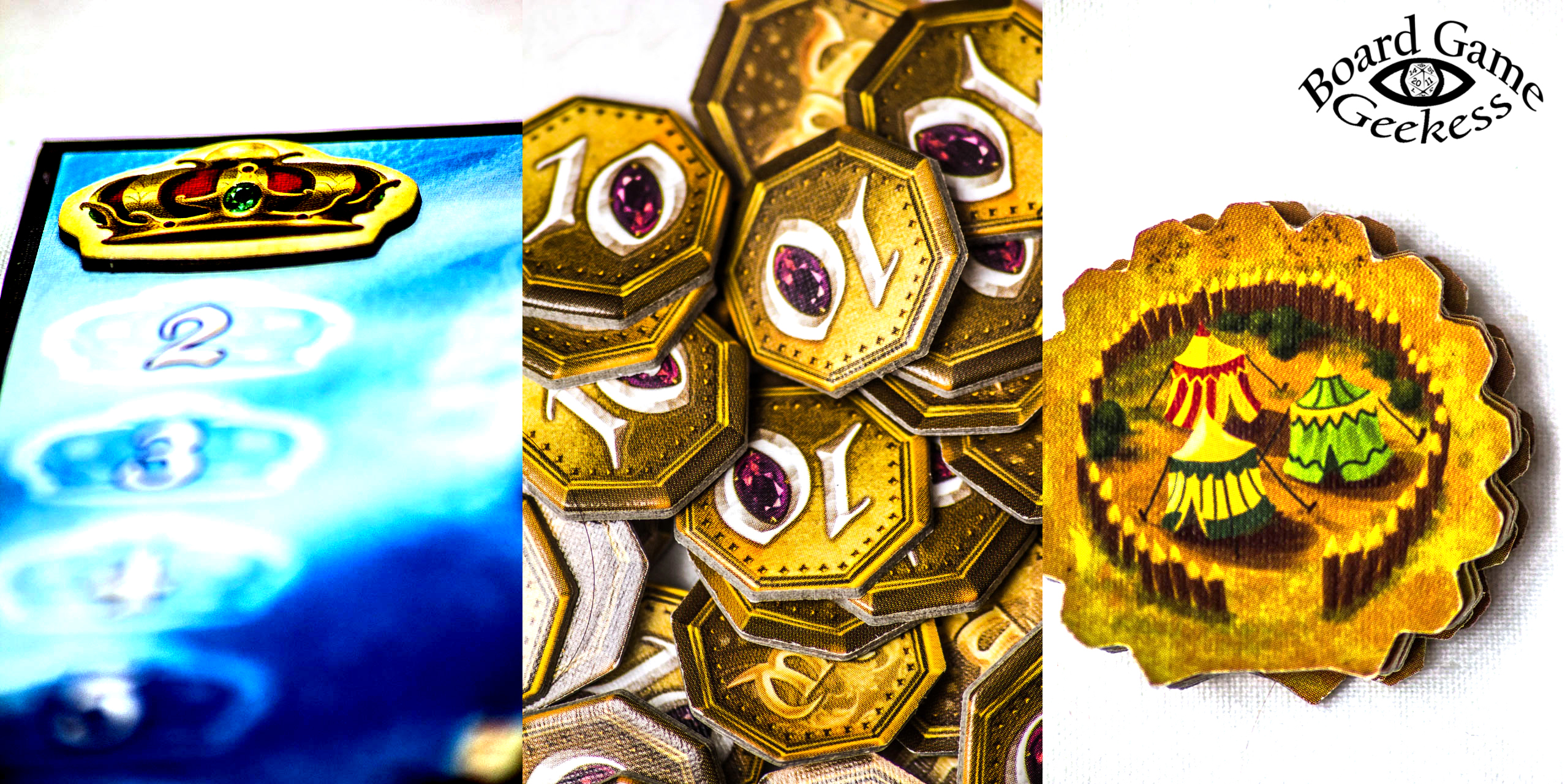 If you hadn’t guessed yet, I absolutely love this game, it’s got a perfect balance of ease of play and great depth of strategy. In order to keep the games competitive and the players vying for control of regions, the game comes with 2 double-sided boards, so that regardless of whether you’re playing with 2 or 5 players (or anywhere in between) the size of the board is perfectly suited to the number of players. On your turn you can select from six randomly dealt races, each with a random ability, which allows for a huge variety of combinations, meaning every game will feel unique. The races are laid out in a specific order with the first one costing nothing to select and each subsequent one requiring 1 additional victory point to be spent, which is then placed on the preceding races. This means you face a choice, spend some victory points for the ideal race/ability combination or save your points and go for an earlier race, even snagging some bonus victory points as others have had to pay before you, thus making the early races more enticing over time. This selection is an important decision and selecting the right race for the conditions on the board is essential to maximising your score. Once selected, you can start conquering regions, making sure to utilise your race and special abilities to their fullest and being careful not to leave yourself vulnerable to an attack by the other players. After each turn you score victory points based on the regions you control and your abilities. Victory points are kept secret, so there’s always the opportunity to try and throw the heat off you onto another player with some persuading of the other players. (Geekess note – Mr. Geekess is particularly good at doing this and I can’t count the number of times we’ve been convinced to pay close attention to another player who is “running away with the game” only to have him sneak in from behind!) Eventually though, you’ll spread yourself too thin and decide to put your race into decline at the beginning of a turn, removing all but one race token from each region and losing your special abilities. You still score points for each territory your declined race occupies on this and subsequent turns, but on your next turn you’ll be able to select a new active race in the same manner as before. This is the real heart of the game, deciding when to go into decline and what new race to select – go into decline too early and you don’t maximise the points you could have made with that race, go into decline too late and you’ve spread yourself thin to the point of extinction. This is a wonderful game, the boards and artwork are beautiful, the races and abilities are numerous and interesting with enough variation and differences to make each combination feel unique. There are also numerous mini-expansions to add more races and abilities to the game. If you don’t enjoy board games that pit players against each other in direct conflict, then this might not be the game for you, but for everyone else, new players and seasoned veterans alike, this is definitely one you should get.

So I know that there is at least one follower who is really not a fan, but I also know that this Small World review was also specifically requested by a friend of mine. Clearly the small world is divided in its opinion on Small World? Have I hit the nail on the head, or is Mr. Geekess closer to the mark? What do you think of the game?