“Can you save humanity?” the box asks in bold letters as a group of four stand side by side, poised for action. When playing Pandemic, most often the answer is “No,” but it’s quickly followed by, “That’s not going to stop me from trying though!” Which is both unsurprising and perfectly appropriate! 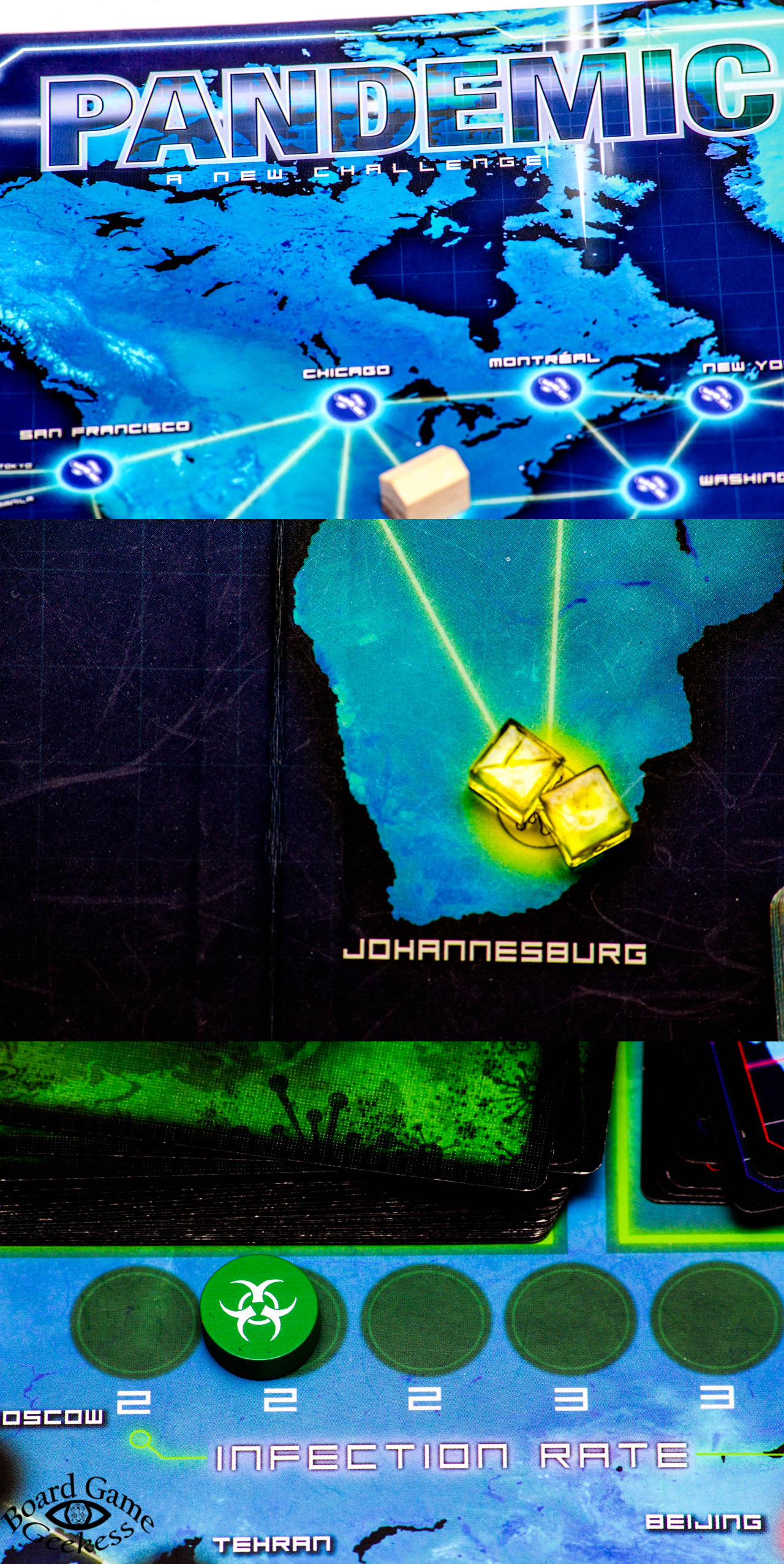 Having been released in 2007, Pandemic is not a new game, but it’s built on a premise that doesn’t get old – save the world before it’s destroyed. It sounds a bit like one of those action movies alla Vin Diesel, but this time around it’s not terrorists that we’re saving the world from, but diseases. Four of them to be precise. And it’s not action heroes that we need – it’s researchers, strategists and medics – those who use more than brute strength as their weapon of choice. We don’t need gung-ho individuals who are going to run in and save the day – we need teams who can work together to get the situation under control before the diseases spread too far. Come to think of it, the premise is probably more relevant today than it has been in the years since it’s release. 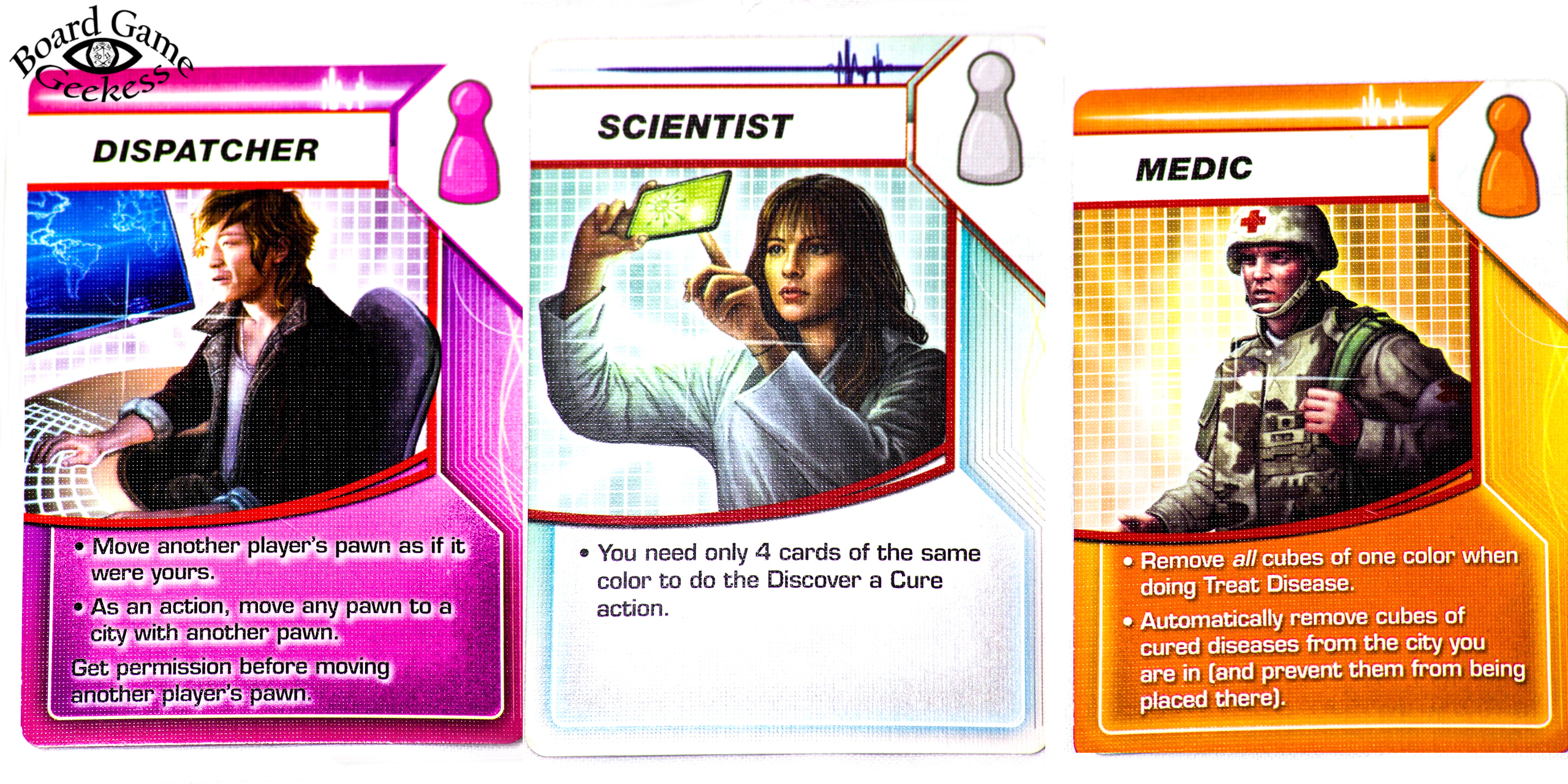 The game’s mechanics are genius, replicating the way that disease spreads in such a realistic way. You start off the game by infecting the world, and then try to cure as much of the disease as you can before an Epidemic card comes out. Once the epidemic card appears, and the number that may come up will depend on the difficulty that you choose, you take all of the cards that had been infected before and, rather than discarding them to the bottom of the deck or putting them back in the box, you put them straight back on top of the pile, meaning that places that have already experienced the diseases will be more prone to reinfection. Cities can only hold a certain number of disease cubes before an outbreak occurs, causing the disease to spread to all neighbouring cities, which may in turn lead to further outbreaks if they’re at their capacity for disease cubes as well. It makes the game tough, but it really does reflect well the way that disease actually spreads from country to country. Everything about the game is actually well thought-out, from the mechanics to the pieces, to the roles that you are dealt which affect how the game is played and varies the strategy to allow for a lot of replayability. There are so many choices of action that the game could get confusing for new players, but the fact that you are working together as a team means that if there is just one player who knows the game fairly well, it’s very easy to jump into and get the hang of. The fact that there is rarely just one way to deal with the situation and one right answer to get to the end and win makes it both interesting and exciting for all players, and that the same cards keep coming up and reinfecting cities that have already been cleared keeps you on the balls of your feet, always having to rethink your next move with each turn that passes before you. This is the kind of game that you are going to play over and over and over again in one sitting, especially if you lost the first few times, and the likelihood is that you will. It’s so quick and exhilarating that it leaves you on a high that is hard to let go of. It’s also frustrating beyond measure, but that’s just part of what gets you coming back for more. It’s one of those addictive games that is practically impossible to only play once.

Oh, and did I mention how pretty it is? Because it really is. With brightly coloured disease cubes (who would have thought that disease could be so fabulous?), event and role cards that are designed to draw and keep your attention, and a board that is beautiful to boot, the base game is pretty on its own. But add to that some of the expansions, and you go from pretty to glorious with components that fit together beautifully in a box that makes the OCD in me jump for joy! Even if you don’t get the expansions, I highly recommend getting petri dishes to store your disease cubes for the added effect and convenience. It can be really difficult to enjoy a game where there are more ways to lose than there are to win, and though I cherish the chase, there are those who will find the frustration and stress too much to bear. There are few things worse than coming oh so very close to winning, only to have victory snatched from your grasp because of a small aspect that you hadn’t been paying attention to. I can’t count the number of times that I’ve been one turn away from winning only to have the player deck run out, or find that there aren’t enough disease cubes to be placed on the board, or have a bout of outbreaks just wipe us out in one go! The fact is, the further in you get, the more can and will go wrong. 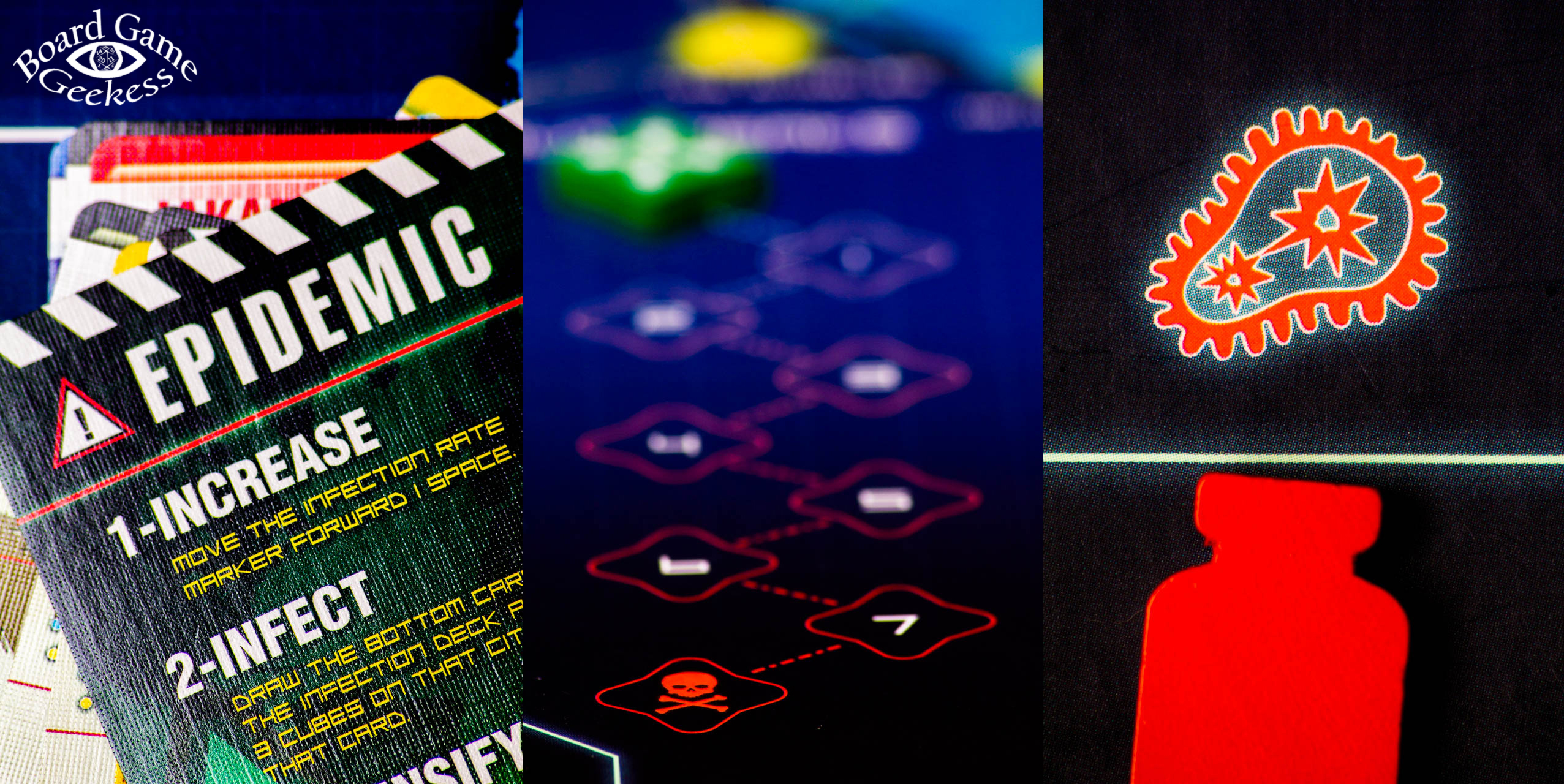 There is the potential for one person to come in and be too domineering, taking over everyone’s turn and essentially leaving the other players to twiddle their thumbs and go ,”Well then, why don’t you just take my cards and get on with it.” The fact that there is no traitor component (at least not in the original) makes this circumstance more likely than with some of the other co-op games, since there’s no real reason to stop one person from just taking over the situation. While some co-op games can accommodate the weak-willed or unsure, Pandemic is not one of them, and while you may want to discuss what is best for the team, you need to be able to make your own moves and choices otherwise you are going to be left in the dust, and are certainly not going to have much fun. 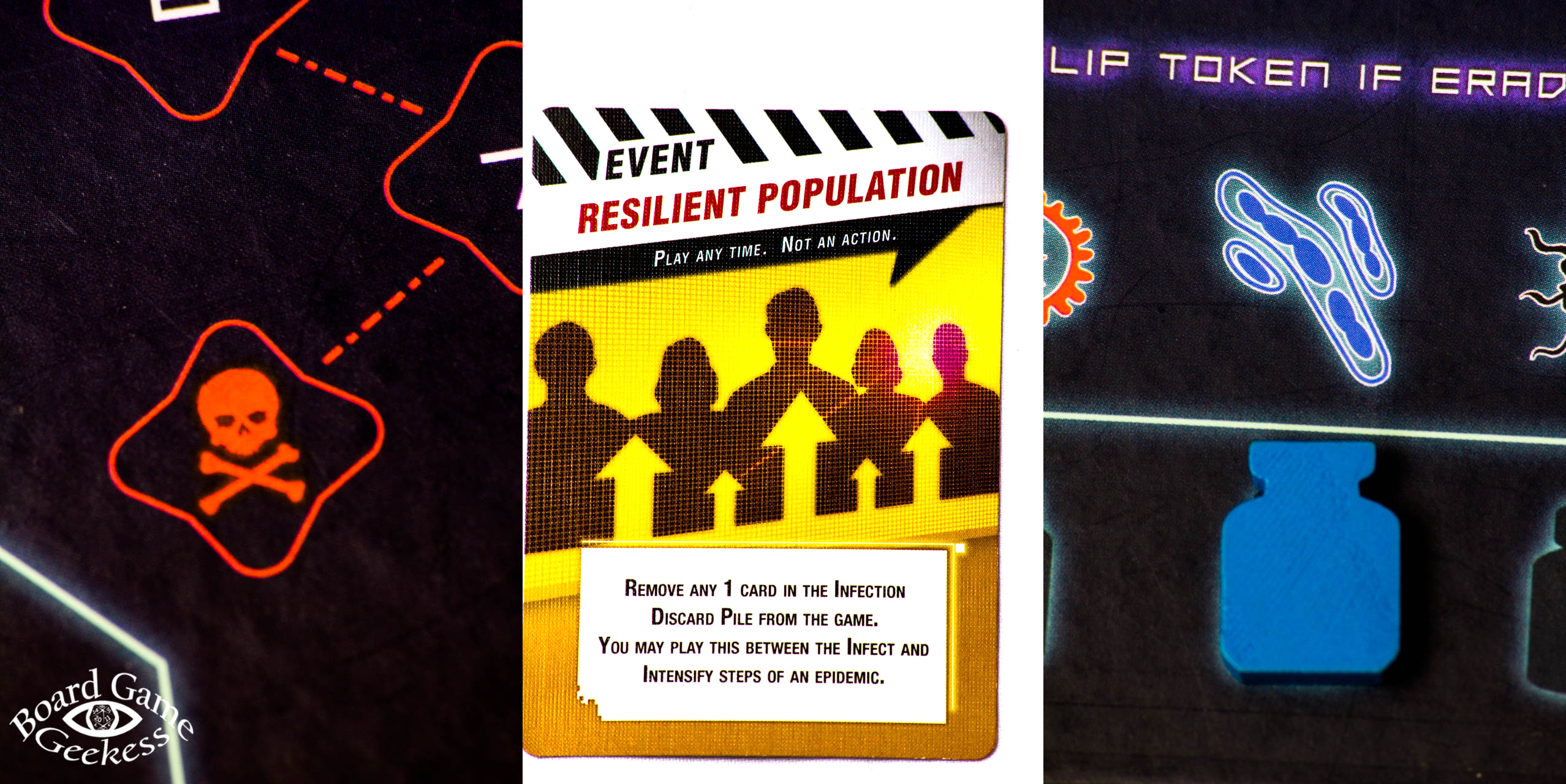 Apart from that, my only other gripe (and one that many of you can just dismiss offhand immediately) is that it’s a four player game, which means in our household that it’s a little exclusive – we tend to like having couple friends over as I have mentioned before, and since there are three of us in the house (myself, Mr. Geekess and our housemate), it means that one of us has to sit out each time the game is played. We’ve bought an expansion to help remedy this situation, but the expansion required the purchase of a further expansion (you need to have On The Brink in order to make In The Lab work), which just makes me feel like getting the game to the point where it can play five is like pulling teeth.

Pandemic is a game that will be familiar to a lot of people, and those that do know it will also know that it can be brutally difficult to beat the game, even on the easiest setups. The world is in panic as four deadly diseases threaten to anhihilate the human race, the only hope is a handful of globe trotting specialists working to stem the tide of disaster whilst they research the cures that can save humanity. That’s where you come in, you take on a randomly selected specialised role, with a unique ability, and travel the world, setting up research stations, collecting the information that you’ll need to create a vaccine and treating those you come into contact with in the hope of containing the outbreak. You can see the appeal. Who hasn’t wanted to be the hero that swoops in and saves the world, in fact it’s my second most frequent dream, the first of course being world domination. The world quaking as I rule with an Iron Fist, minions to do my bidding and bring me those cute drinks with the tiny umbrellas… wait, what was I talking about? Oh, Pandemic. This is a game that a lot of my friends enjoy, and while I think the concept is fantastic, I’m not really sold on the execution. During your turn you can take up to 4 actions, but these usually amount to move some where and remove disease cubes from that country, given that you’ve often got very limited movement (building research stations in strategic places can help with this) I often feel like I’m just going through the motions of moving my piece about the board without having to make any meaty decisions. The game mostly boils down to which cards are drawn, and while there’s something to be said about preempting and managing the diseases, often, even with the best planning, things can snowball quickly out of control. I also find that the game doesn’t scale very well with the number of players, with 2 players being very easy to beat and 4 players being nigh on impossible. This is because each player needs to collect a certain number of each type of card in order to research the cure, and since there’s the same number of cards no matter the number of players, the fewer players the easier it is for them to collect sets before things get messy. Don’t get me wrong, it’s still a fun game, and the components and board are beautiful, I just feel they’ve not quite hit the mark on the gameplay.

Overall, Pandemic is another game that I think needs to be in every decent board game collection, though it would seem that Mr. Geekess disagrees. It is fantastic, quick and fun and it’s the kind of game that you can (and will feel the need to) play over and over and over again until you’ve won at least as many times as you’ve lost. But it is not for the faint of heart or the quick of temper!

What do you think?

3 comments to Cure the World!