Role playing games – you either love them or hate them, there is no in-between. They can lead to fun-filled fantasy adventures with your best mates, or endless arguments about minuscule details that really don’t matter in the larger scheme of things. They can be friendship makers or breakers. Some people take them so seriously that it’s really easy to take the mickey out of them, and that is where Munchkin comes into play.

Munchkin is a card-based role-playing game where you and your friends are adventurers of varying races, classes and sexes kicking down doors, battling monsters, looting treasure boxes and trying to be the first to reach level 10, all while trying to stop others from getting there before you. And while this might sound like a pretty average role-playing game, what makes it better than average is the humour in it. Munchkin in no way tries to take itself seriously – it is filled with references to popular culture (or references that used to relate to popular culture back in the day, since the game was made around 2001) and the monsters that you face are as likely to be intimidating pot plants and gazebos as they are to be dragons and goblins.

The humour. Oh, man, the humour! Perhaps it’s because I’m exactly the right age for the references to be pertinent, but they really get me every single time. Whether it’s the Gazebo coming up, leading to endless retellings of Eric and the Dread Gazebo for those who aren’t acquainted with it, or giggling at the Lawyer’s professional courtesy of not attacking thieves, every game is filled with fits of laughter and loads of fun. Even if you know all the cards and are prepared for when they come up, there is always a high likelihood that you will be playing either with someone who has not come across a particular reference before, or who has developed inside jokes with their own group of Munchkin-playing friends which will cause a good deal of amusement. 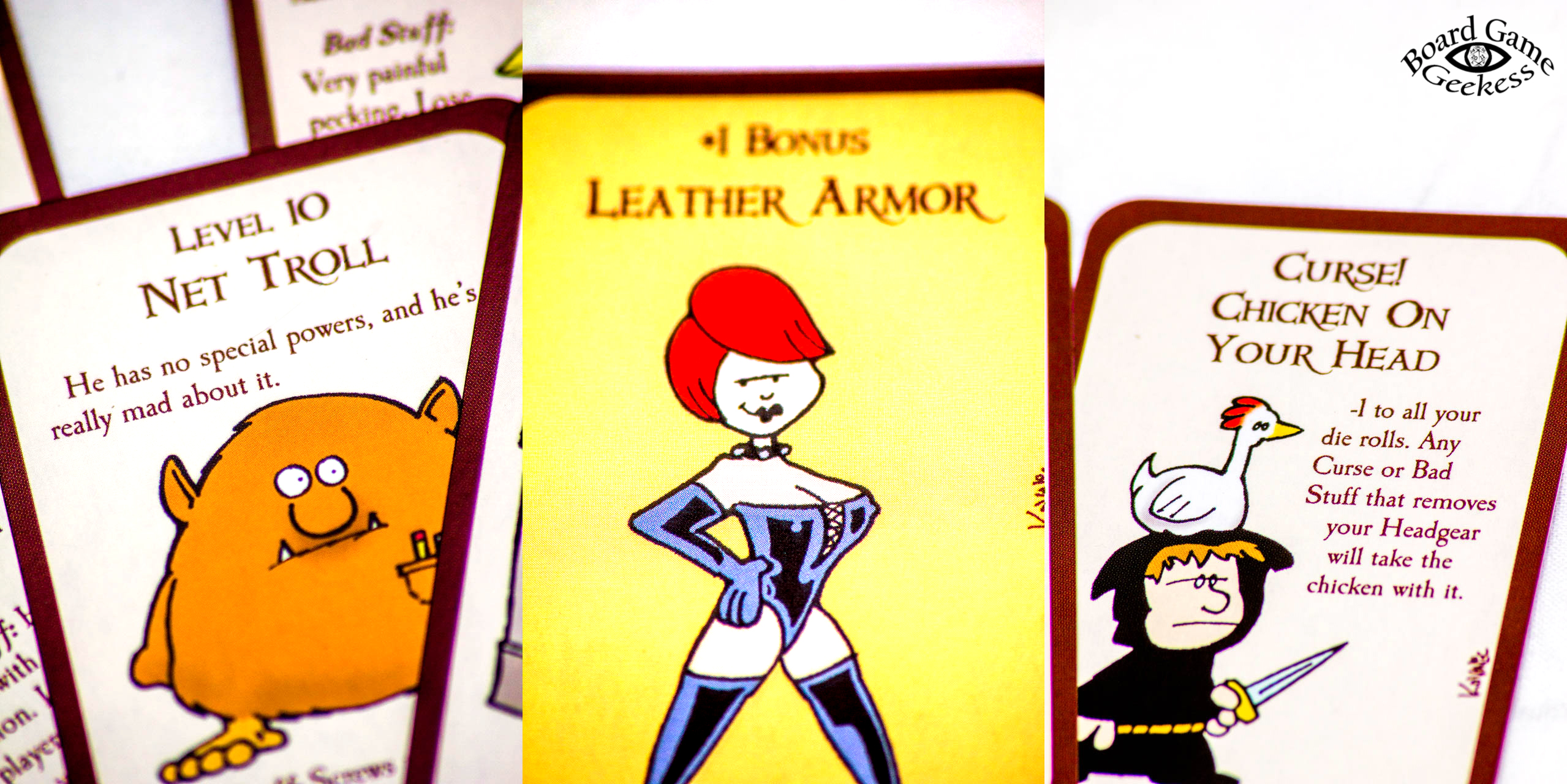 But, stepping back a bit and looking at what actually makes Munchkin a good game, I’ve got to say that a big part of it is the simplicity. You all start on equal footing as level one humans, and have to work your way up to level 10’s in whatever way you can. There are very few components to the game – the base one including just a deck of Door cards, a deck of Treasure cards and a D6 (albeit quite a pretty one). While the Deluxe game, which was used for this review, does include a few extras including a board, character models in 6 colours and gender indicators to match, those aren’t actually necessary to play the game – they just make it a bit easier to keep track of things. The simplicity makes it very easy to teach and/or learn and also means that it’s really easy to travel with, which is useful in and of itself! What’s also great is the number of expansions that have been developed for the game, and the way that they all fit together neatly. If there is a particular theme that you enjoy, say for example Zombies or Lovecraft or a pre-apocalyptic future complete with seals opening and the end of the world looming, well then you can just buy one of the stand-alone expansions! But even better than that, if you have more than one Munchkin game, you can merge the two of them to make things that little bit more interesting. To me, that indicates a game that’s been well-designed to encompass any future expansions that may come out, but also made so that even the base game on its own is thoroughly enjoyable.

Much as I would love to say that Munchkin is all positive, it’s not for everyone, and I can see why. It may be a satirical RPG and a casual RPG, but it is still a role playing game at heart, and gamers who don’t enjoy role playing are not going to be as into it as those who do. They may giggle at some of the jokes, but you’ll know that their heart isn’t in it, and that has the tendency to bring a mood down. So, if you are hoping to use Munchkin to entice those who are anti-RPG over to the dark-side, I’d say think again. If, on the other hand, you are trying to get someone into role-playing, this may be the game for you! Like a typical RPG, Munchkin has the potential to make or break a friendship. Much as you may enjoy working together to thwart other players and stop them from reaching level 10, there will come a time when your alliance will break – when you or your ally will be on that pivotal level 9 and need taking down a peg. I have known this to cause bitter rivalries between brothers and friction between couples, and while it’s all fun and games at the end of the day, some grudges are hard to relinquish.

While there is a good aspect to having a large number of expansions, there is a bad part too, and I’m afraid that Munchkin is no exception. Some of the expansions just feel lacking when played on their own or don’t fit in with the others well, and at times the expansions can detract from rather than add to the game. As an example, Munchkin Apocalypse is part of our collection, and while it was fun to play the first couple of times, it just didn’t feel like the real Munchkin, which is why we ended up buying the Deluxe edition – mostly actually for the base game, though the addeed bits and bobs really didn’t hurt.

Munchkin reminds me a lot of my varsity days, getting together with friends in the evening to play some DnD. Sure we’d delve into some dungeons, fight some monsters, but the thing I always enjoyed the most was the banter, the in-jokes and just the sheer silliness of things, and Munchkin captures this perfectly. Munchkin is your typical hack and slash dungeon crawler, you play a brave hero who bursts in on unsuspecting creatures while they’re lounging about at home and either turn them into swiss cheese with pointy things or flatten them with blunt ones. You then proceed to search the room for anything that’s not nailed down and make off with their life’s savings, leaving a newly widowed Mrs. Monster to explain to the little monsterlings about why daddy isn’t coming home and why they can no longer afford to live in such a splendidly dank dungeon anymore.

Though the monsters you face are not your typical Orcs and Beholders, you’re far more likely to face such terrifying creatures as the Lawyer, the Stoned Golem (he probably won’t notice you if you just wander on by) or Crabs (Itchy!). Though my personal favourite is the Gazebo – if you don’t know why, go read this, I’ll wait. The game tends to start out amicably enough, with players willing to help each other out for a percentage of the spoils, however the end game tends to devolve into all out war, with curses flying this way and that, monsters being equipped with all manner of weaponry in the hopes that they will vanquish your opponents and increasingly desperate players looking through their cards for anything that can help. Of course it wouldn’t be much of a role-playing game if there wasn’t some meta-gaming, and with cards that allow you to bribe the DM with food or invoke obscure rules to gain a level, you should feel right at home. All in all, Munchkin is a great game, the humour is fantastic and the game play is solid, though it can take a little long at times. Any board game collection certainly couldn’t be considered complete without at least one version of Munchkin in it.

All this being said, I believe that Mr. Geekess and I are in agreement that the good is worth the bad, and the game is a riot to play with friends. Definitely worth having the base game and at least an expansion or two in your collection!! Have you played? What did you think?