King for a Day

Ever wonder who’d win in a fight between Godzilla and King Kong? I know that they made a movie about it and all, but really, who has the time to see silly movies anyway… especially when you can act out the action yourself!

Cast your mind back to the good ol’ days, when horror movies were less about the special effects and more about the story-line; when Godzilla and King Kong ruled the silver screen and everyone marveled at how awful the acting was? Feels just like yesterday, doesn’t it? Well I can’t cast my mind back that far – since I wasn’t actually born in that golden era – but the monsters from those classic movies were Richard Garfield’s inspiration for King of Tokyo. King of Tokyo is a dice-rolling game where you and up to five of your friends try your best to take and keep control of Tokyo City (and Tokyo Bay if there are enough players) by smacking your enemies down and maximising your victory points, energy cubes and bonuses gained from buying cards. You’ll get to play as some of the “classic” Japanese monsters, who’ve apparently gone into witness protection and changed their names to things like The King, Gigasaur and Meka Dragon. You’ll also find some more generic monsters like a Kraken and an Alienoid, and some more original monsters like, my personal favourite, Cyber Bunny. Learn when to stand your ground and when to run for the hills and lick your wounds, when to spend and when to save and you may just find yourself the last man standing or the most victorious!

It’s dead easy to learn and to teach, and even if you’re all first time players, it’s easy to just jump right into and get the hang of. Once you know the basics of how the numbers and symbols work, it’s all pretty straight-forward. This makes it a fantastic game for new gamers or for converting people to the wonders of board games. It’s quick too – it’s pretty rare for a game to take more than half an hour to 45 minutes – so it’s a great way to pass the time or to play when you only have a few minutes to spare. Chances are, though, that you’re going to want to play more than once – it’s that addictive kind of game, and there’s nothing worse than losing when you were JUST about to win. Best out of three, perhaps? 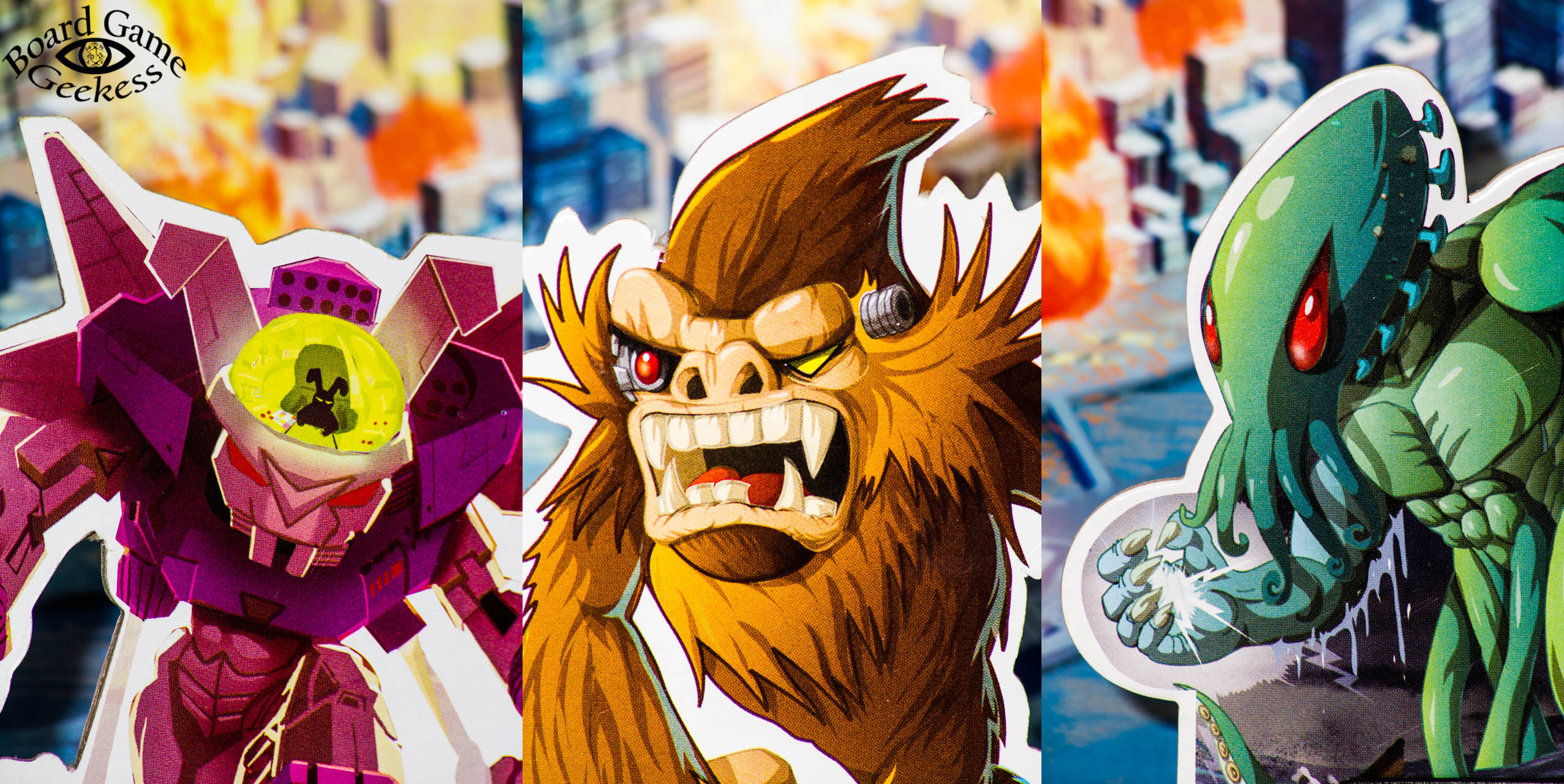 It’s got a fabulous cartoony feel to it, which diverges from the monster movie theme significantly, but works so well that it’s hard to be bitter about it! You look, feel and act more like a super villain from a Marvel comic than like a wild, frenzied beast, and I think that works perfectly for a board game. It almost feels like there should be comic-book-esque dialogue clouds (“WHAM!”, “BAM!”, “WHOOSH!”) popping up when hits are rolled… but I guess my sound-effects will just have to suffice! The art is done really well, and the dice are gorgeous! Which you may think is weird thing to say about dice, but considering that we have a treasure box filled with them and keep trying to find ones that match the King of Tokyo quality… yeah, okay… we’re weird. The board and the components are simple, which make a nice change from some of the other games we own. Playing doesn’t take up much space unless you have a tendency to roll like a crazy person, as some of our friends do. The board is literally a square a little smaller than the box itself which doesn’t fold out at all, and most of the space on the board is simply there for the effect – there’s a small circle on it to designate the current “King” and another small circle over Tokyo Bay for when there are two “Kings” in there at the same time (ie. if you have 5 of more players), but the rest is just artwork. Aside from the board, there’s a deck of cards, your monsters, their boards, some energy cubes and the dice. And that’s pretty much it! Setup time is negligible and you can pretty much jump straight in when you’re ready without trying to unpack and organise bits and pieces. Best of all, the game is just really fun. It’s not trying to take itself too seriously, and it works because of that. It’s not something that you’ll focus on for hours on end like you would in a game of Shadows or Puerto Rico. It’s silly, and it makes fun of itself. You can tell by the names of some of the cards that the purpose of building this was to add a bit of good humour to board gaming, and it really does.

Looking for bad things to say about King of Tokyo is like trying to find a needle in a haystack – there really is so much positive to say about it! The turning mechanism for the life and victory points on some of the cards was unevenly placed on one or two of the boards which made them marginally more difficult to turn, but really now… if that’s the worst thing that you can say about a game, then you’ve got to know that it really is a goodie!! I am sure that it won’t be for everyone – those who prefer co-op will prefer not to have to fight against each other, some may really hate dice rolling games (we have one or two of those in our friend-group as well) or it just might not be the right game for the mood that you’re in for whatever reason. But in general, I can find absolutely nothing to fault the game on. This is just an example of a game done really, overwhelmingly right!

Richard Garfield should be a name familiar to most people who enjoy table top gaming. I myself spent many hours (and much more money than I’d care to admit) building decks and playing Magic: The Gathering over the years. While I no longer play, feeling that board games are just far better bang for the buck, when I saw that he was the creator of King of Tokyo, I knew it was something that I needed to add to our collection. Though of course the idea of masquerading as a giant monster tearing through the city didn’t hurt either.

At its core, King of Tokyo is a dice game – you roll the dice, choose which to keep and are able to re-roll those that you don’t. You win the game in one of two ways, by raining down destruction on your fellow monsters and becoming the last monster standing, or through the accumulation of 20 fame points which presumably lands you a lucrative movie deal. While you’d think a game based on dice rolls would be decided almost exclusively by luck, there are a lot of important ways in which you can influence the outcome of the game. Choosing which dice to re-roll is the obvious one, but with two re-rolls, you can steer the dice towards your intended goal – want to be all out aggressive, just roll for attacks; want to build your fame, roll for point combos. Or maybe you’d prefer to build your power first before making your move? This is where you can really differentiate yourself from the other monsters in Tokyo, you can roll the dice to accumulate energy cubes, which can be used to purchase cards from the pool. These cards have a huge variety of effects, from minor once off gains in fame to permanently giving you an extra dice, and choosing which cards to buy, or even just preventing other monsters from buying power ups by spending your cubes to clear the board, can make a huge difference. Finally, choosing when to stand your ground and fight in Tokyo or when to turn tail and lick your wounds can be the difference between winning and an untimely death. I can’t think of anyone that I’ve played this with that hasn’t enjoyed it, the dice are beautiful, the artwork and cards are great… Really the only thing to find fault with is that apart from the aesthetic, there is nothing to differentiate the various monsters. However, as it happens, there’s an expansion which addresses exactly that, one that we’ve recently acquired. King of Tokyo: Power Up! introduces a new monster and adds some extra flavour to each of the existing ones, giving you the choice to roll 3 hearts to evolve your monster which adds a monster specific ability to it.

Even with just the base game, King of Tokyo is a lot of fun, the games are relatively quick and the large deck of power up cards ensure that each time you play you’ll get a unique experience. Add in the expansion to give each monster their own unique city crushing personalities, but either way, you’re sure to get hours and hours of enjoyment out it.

In summary… get it. Get it now. Don’t wait… just go! Have you played? Who was your favourite character to play?

4 comments to King for a Day