The sounds of the rain forest surround you and your group of friends as you clutch boldly to your fistful of dice, nails digging into your palms waiting to hear that rumbling voice. Every breathe feels loud and obnoxious. Beads of sweat begin to form. And then it begins. “ESCAPE.” With that, a scrambling of dice commences as you and your friends race to beat the clock, rolling as quickly as you can and exploring this hidden temple to find the exit and escape alive. 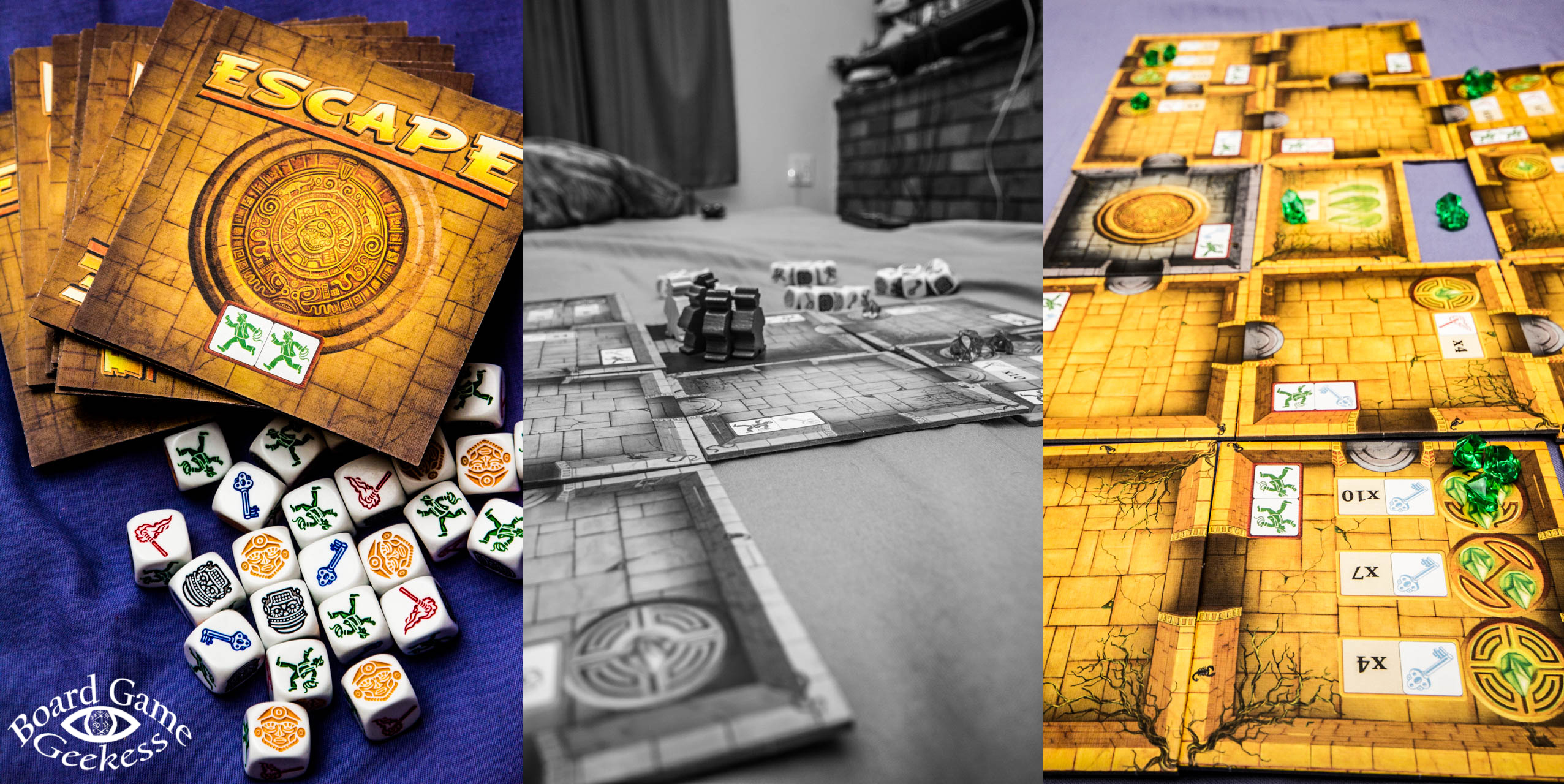 Escape: The Curse of the Temple is a frantic, fun-filled real-time game that will leave you begging to play it again and again. You and up to four of your friends are trapped inside a temple and you have ten minutes to escape. To do so, you will need to roll certain combinations of dice to uncover rooms, explore them, break curses and get out, all while trying to help your friends do the same. Because if even one of you gets left behind when the temple collapses, you all lose.

Wow. Just wow. I wasn’t convinced when Mr. Geekess suggested that we buy this game – it was our 7th purchase, so you can understand my hesitation – but there is no doubt left in my mind that this is a fantastic game to have in our collection! It fits a niche in that it’s incredibly quick. You know those times when you only have a few minutes to spare and want to play something, but know that nothing is playable in the little time that you’ve got? There is no excuse at all with Escape. It’s really quick and simple to set up and there is no chance of it running over the time you’ve got, because if you aren’t out in ten minutes, you lose! The game is over either way. 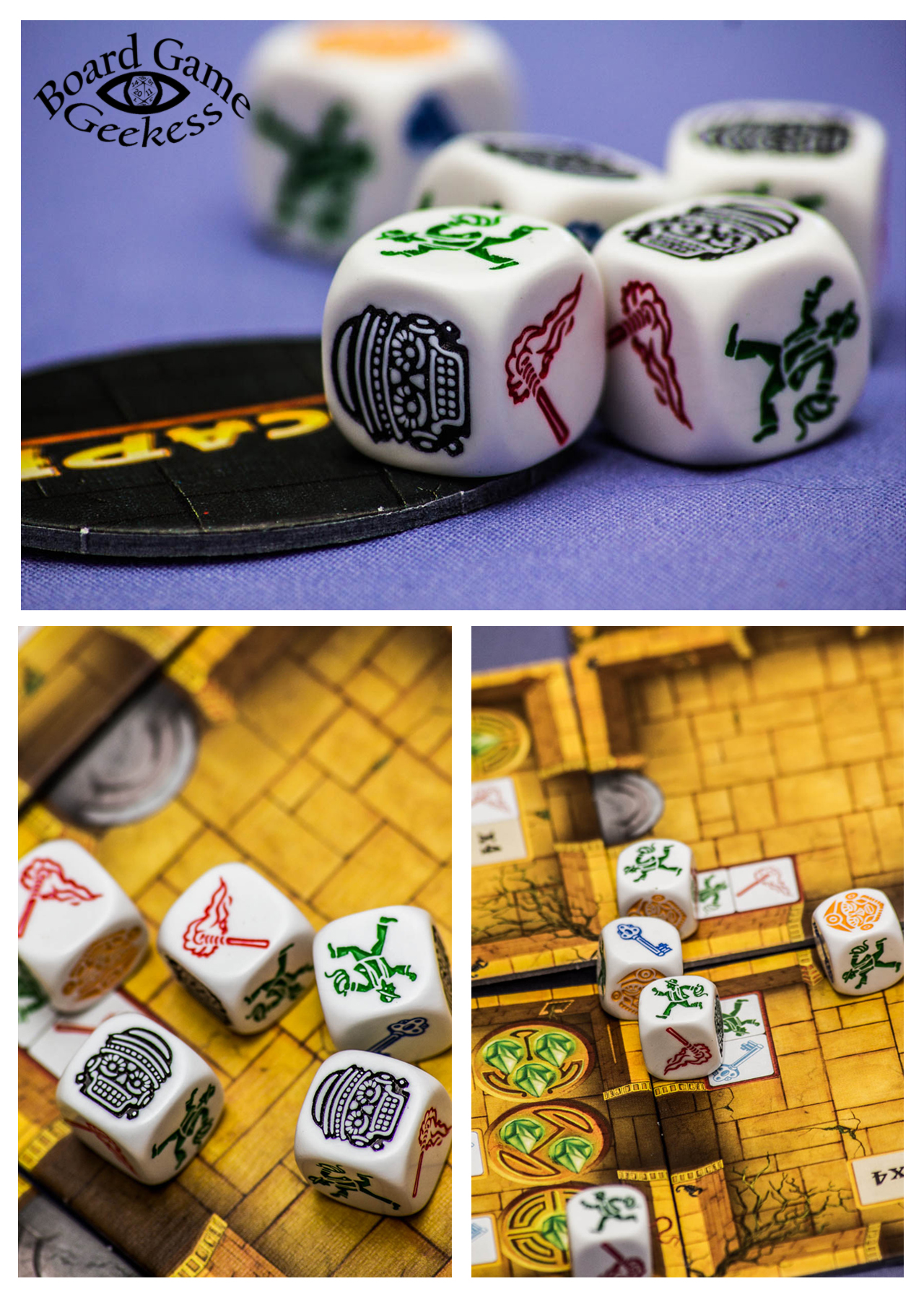 The mechanics work well -frantic dice rolling just feels right when you are trying to explore a temple and break curses! It’s not hard to learn and it’s easy to teach to new players. It’s not easy to win, but it’s not too hard either. It took us three tries first time around, but with the right team dynamic we managed to beat it with a few seconds to spare, and considering how quickly the game plays, a few seconds is a lot!! We weren’t convinced by the idea of a soundtrack, but after reading a few comments saying that it really added to the game, we went for it, and it really does add an atmosphere to everything! It raises excitement levels to the max which makes the game that much more thrilling.

It’s also a game that you can easily learn by watching, and even though it only plays 5 players (which is a bit of a problem considering how much fun it is with a full group of people, and considering how many friends we’ve got who share our gaming addiction) the turn-around time is so fast that you can easily switch players without anyone feeling too left out. It’s also thoroughly entertaining to watch as people scurry around, and sometimes it’s good to have an outside party keeping track of who rolled what and when.

It’s stressful. Do not play this game if you have a weak heart, because the soundtrack alone raises the heartbeat, never mind the franticness and the sense of racing for your life. That being said, the stress isn’t of the same sort as that of a traitor mechanic where you are trying to hide. It’s a stress that your fellow players are experiencing as well, and it’s pretty short-lived. There are moments of calm in the midst of the rushing when a gong sounds indicating that everyone should run back to the starting room, and I suspect that this was put in to prevent panic attacks. 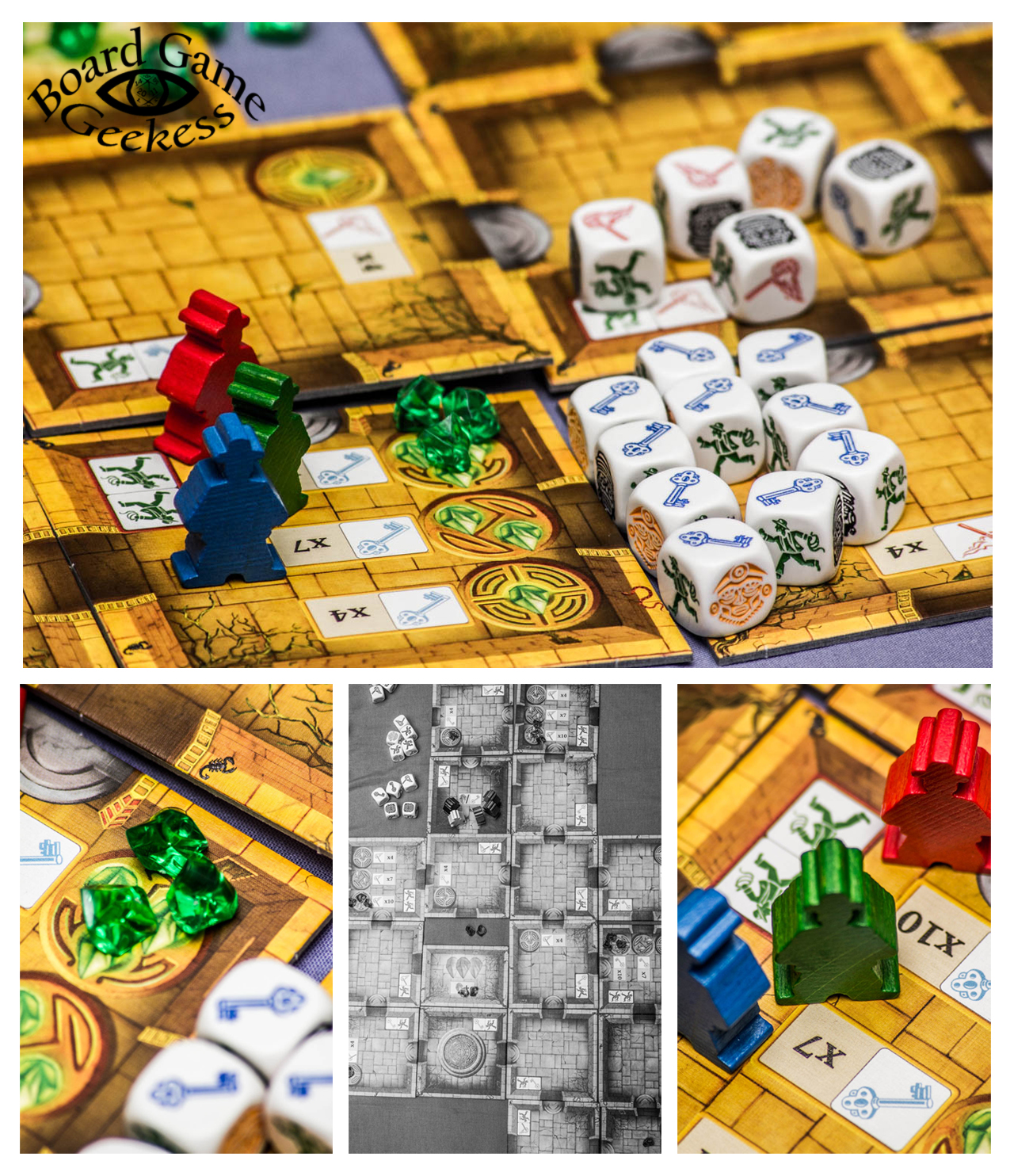 I’ve also noticed that with the frantic nature of the game, it can be easy to lose track of dice and get confused about what has been rolled and what should be used when. Black curses should only be rerolled once a Golden mask comes up, and friends can help you out with this, but sometimes a well meaning friend doesn’t realise that you’ve left their room, or you roll a Golden mask and pick it up before you’ve realised, or you roll a combination that you need, but the dice are spread too far apart for you to put two and two together in time and so you just reroll them all.

Finally, I am not thoroughly convinced of the replayability of the game. We’ve played it five times so far, and have only won twice, but I get the sense that if you get the right formula you may start finding the game a bit of a breeze. Then again, we haven’t even touched the two expansions that were included in the game… I may find it more challenging after trying it out a few more times!

This was a game I was really hesitant to get. It had been brought to my attention on my previous board game splurge in Cape Town, with a strong recommendation from the clerk at the store. At the time it sounded a bit gimmicky… “A real time board game where you all frantically roll dice? And it comes with a sound track on CD? Yeah, lets see what else there is.” It caught my eye again while we were out shopping for Small World on our recent trip to Durban (and ended up coming home with 6 other games and a considerably lighter wallet). I knew I had seen it somewhere before so I pulled out my phone and pulled it up on Board Game Geek. It had a surprisingly high rating so I decided to check a few reviews and see what people had to say.

Now this is really not my usual kind of game, I like lots of strategy and planning, chaotic dice rolling would normally be way down my list of mechanics I look for in board games, but the reviews were universally positive. In fact, it was difficult for me to find someone who had anything negative to say about the game at all, let alone someone who didn’t like it. So figuring it would be a nice filler with it’s 10 minute time limit, we took the plunge and bought it, and it turned out to be a pretty good decision.

The mechanics are simple – roll symbols which match those on the tiles to move around, explore the temple and find the exit. Work together with other players to break the curses (again by matching symbols) or try to break them on your own. It’s generally better to stick near other players, not only to help with curse breaking, but also because your dice can become stuck by rolling a dreaded “Black Mask” and you can borrow a “Golden Mask” from another player’s roll if they’re in the same room as you to unfreeze it. You also don’t want to stray too far from the beginning room, because twice during the game a gong will sound and you’ll need to rush back there before the doors slam shut or lose one of your dice for the remainder of the game. The game is as frantic as it sounds, with everyone madly rolling dice, trying to ensure enough curses are broken to escape, because you either all make it out or the temple collapses and you lose.

The game is a lot of fun and the difficulty can easily be tailored to suit the group of players and keep the challenge at the right level, coupled with the additional game modules “Treasures” and “Curses”, there should be plenty to keep you coming back often. It’s never going to be one of my all time favourites, but for the game it is, it does it extremely well. Great fun compressed into a small amount of time, you’re likely to hear “just one more quick game” whenever you pull this one off the shelf.

All in all, I’ve found that Escape: The Curse of the Temple is a winner of a game that I am really pleased to have in my collection. I foresee hours on end of fun being had with it, and it’s already a hit amongst our circle of friends, so you just know that it’s going to end up being a firm favourite and possibly get played to death by the end of the year! Have you played it? What did you think?