Ever wonder what it would be like to be a settler? A conqueror? An explorer? Planting crops, managing workers and trying not just to succeed, but to prosper is what Puerto Rico is all about. 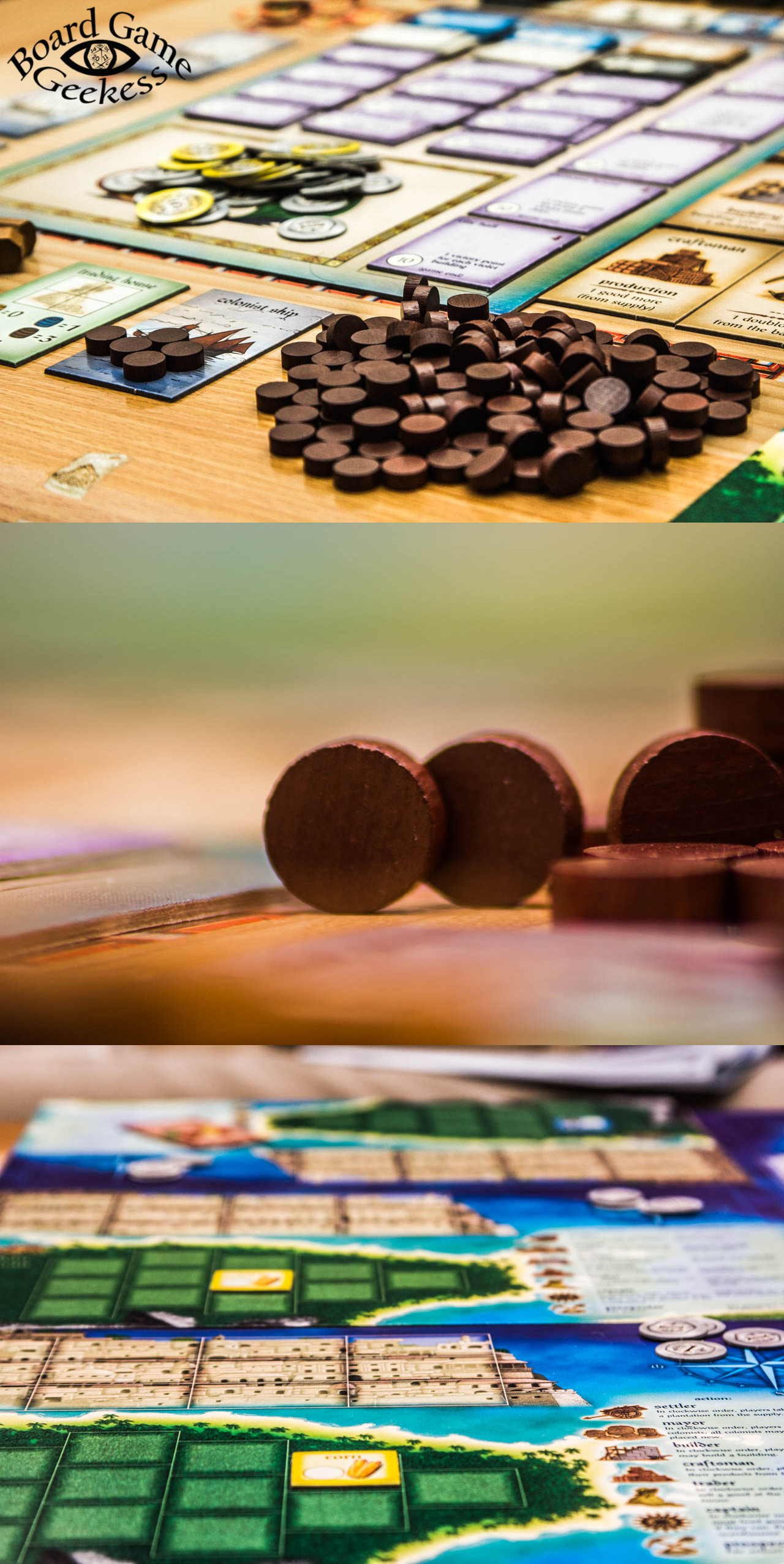 Considered by many to be the worker placement game to end all others, Puerto Rico throws you back in time to an age when life was both simpler and far more complicated. And to think that a few hours of desk-warming at my day-job is the worst of my worries…

The game revolves around picking roles each turn and managing your plot of land as best you can. Each role kicks off a round of actions and gives the chooser a particular benefit. But choose your roles wisely, because everyone else can benefit from your choice too and you wouldn’t want to choose one that would benefit them more than you. 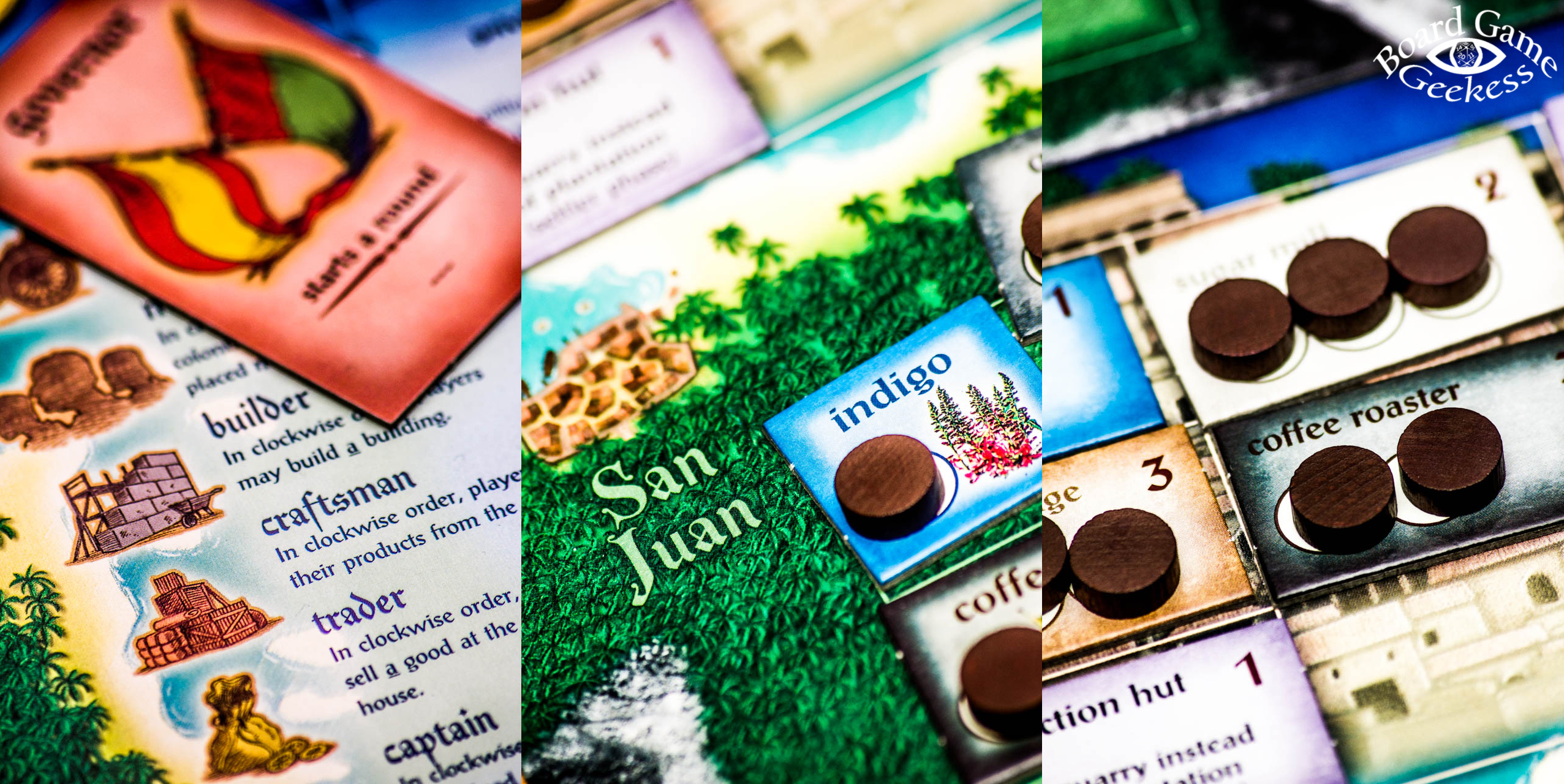 Puerto Rico is the kind of game that you can get lost in for hours on end without even realising it. It’s intensive and time-consuming and you’ll become invested in the outcome. It’s not the kind of game that you can play while watching a game of soccer – it’s something that you have to focus on. And while this all may sound like a minus more than a plus, it’s something that I really love! I like playing a game that I can lose myself in. 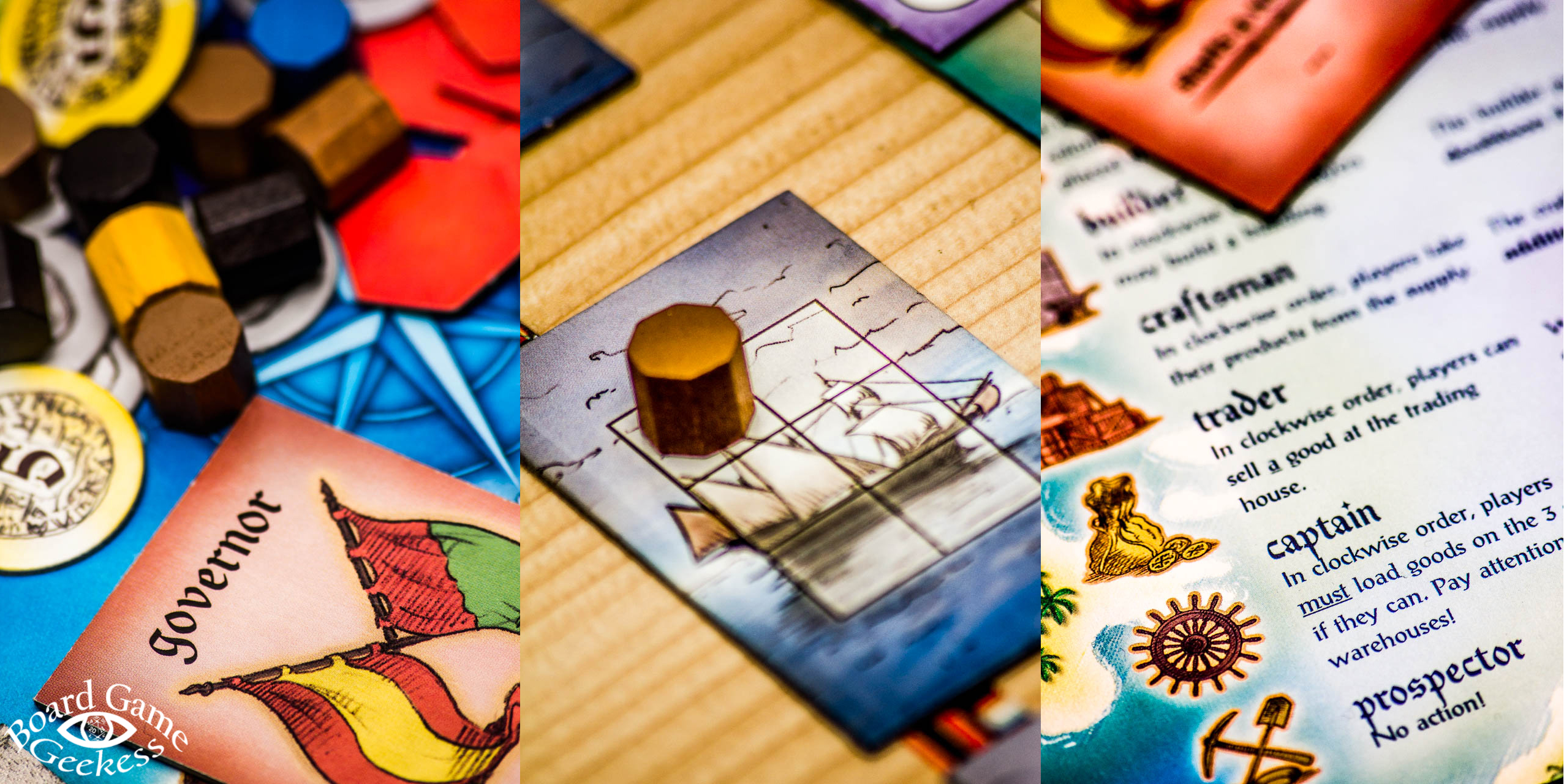 Another big plus is that there are so many ways to win. There is no one strategy that is better than any other – you need to juggle roles to benefit you in a given turn and make the best of every situation that you find yourself in. Maybe you’re better at farming than others, perhaps you’re better at managing your buildings or knowing when to stockpile and when to ship or sell, but there will always be a way for you to win. Little in the game gets left to chance aside from which plants come out in a particular turn. The rest is all about strategy and choosing what role is best for you at any given point in time. 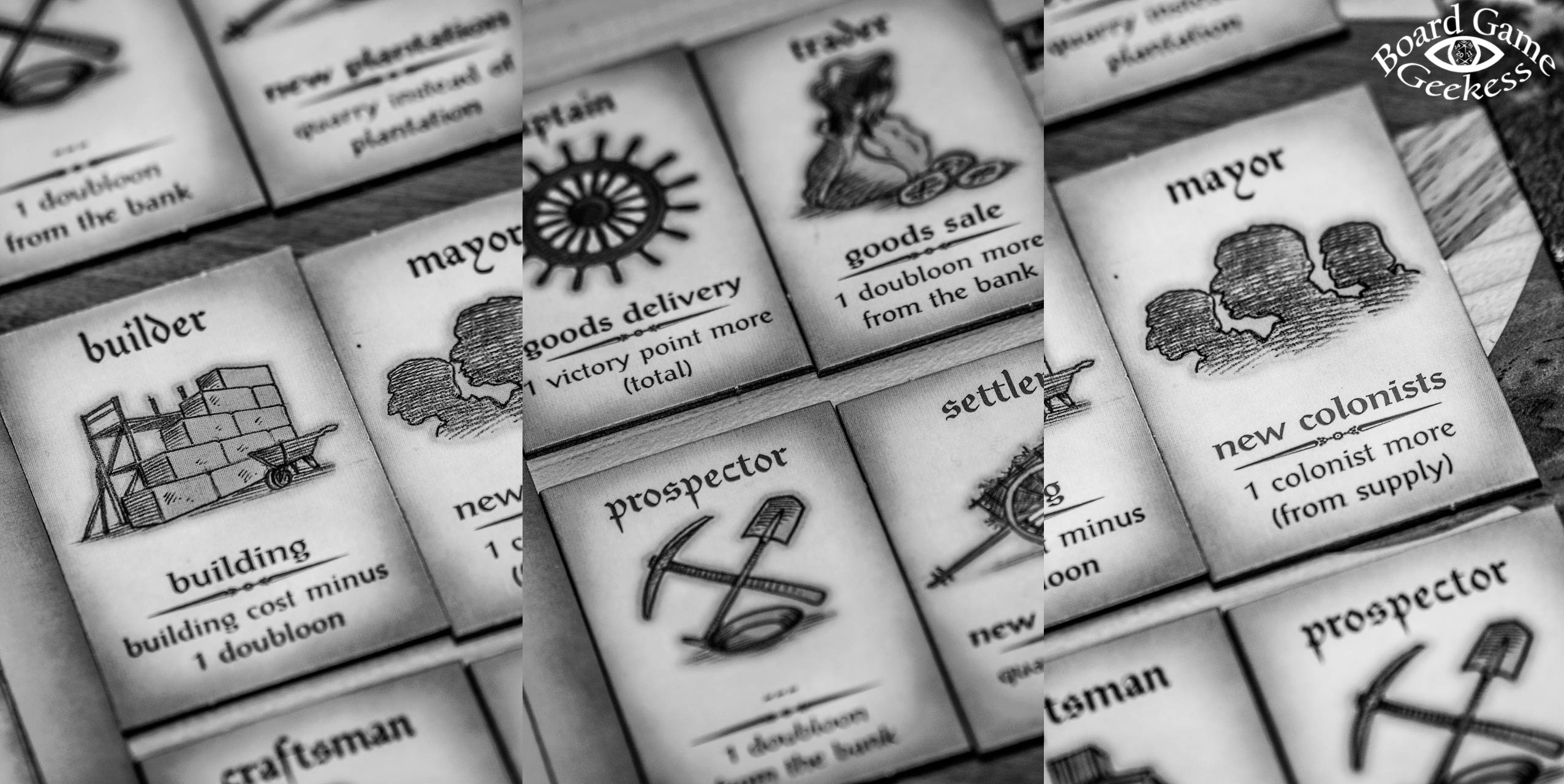 All-in-all, the game is well thought out and great fun to play, as long as the people you play it with are into worker placement games and take take a good whipping to heart or hold it against you (the first time I played, I beat the others by what can only be described as a landslide.)

Having said all of these wonderful things, I have a confession to make. I am not big into my worker placements games. I usually find them a bit boring, tedious, hard to get into. But I can easily be swayed by pretty, shiny things – I’m a magpie that way! And in that department, Puerto Rico falls short – it is neither pretty nor shiny. It is basic as basic can be in terms of components – almost all cardboard cut-outs and not an animeeple in sight! It is an aspect of the game that I was highly disappointed in. Another minus for me is the setup time, probably because the setup often ends up being done by me. You know what’s more painful than shuffling tons of cards like you have to do in Arkham Horror and Firefly? Having to find the exact spot for tons of small components, having to divide them up and place them neatly on top of each other. But then, maybe that’s just a bit of my OCD shining through. 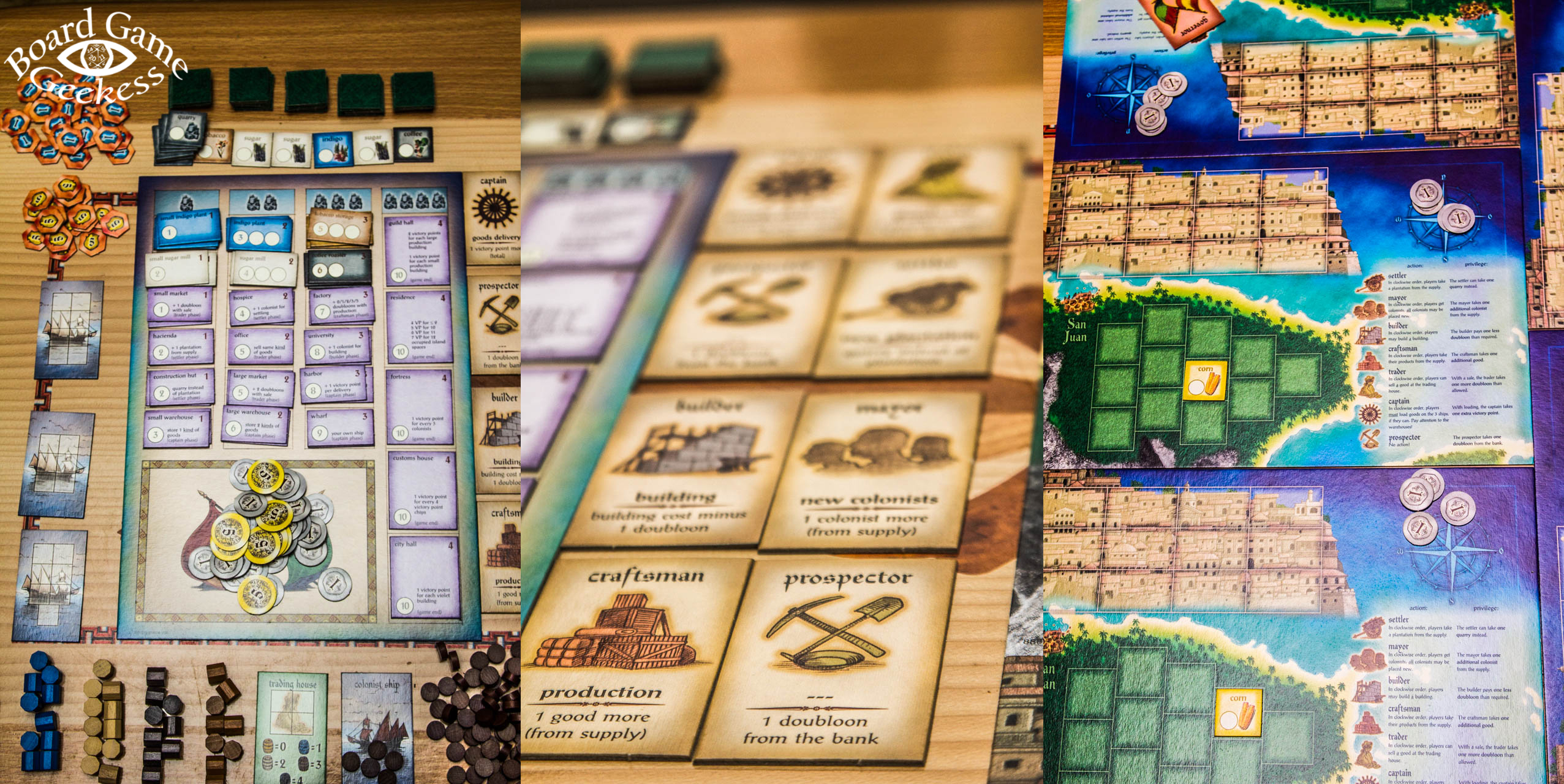 Finally, the game involves a lot of reading, especially when you’re not familiar with its mechanics. They have done a good job of making sure that the rules are well displayed – after all, you have a reminder of how to play on the player mat right in front of you – but it gets a bit much! In my mind, having to read over every role you choose and every building you buy detracts from the game. It also ties in well with my dissatisfaction with the look of the game, detracting from the beauty of it really, making it stark and cold rather than bright and colourful and interesting in and of itself. This all being said, Mr. Geekess has an entirely different opinion. Let’s hear what he has to say!

Puerto Rico is one of those games that takes an obscure premise, in this case running a plantation as a colonial governor, and turns it into a simply amazing game. The game is easy to teach to new players due to the simplicity of the mechanics, but this simplicity belies the exquisite complexity of a game where every decision you make has an impact and the only thing standing between you and victory is how well you’re able to make decisions and read the other players.

The turn mechanics are simply stunning, with the role you select allowing all players to take the same action (although you do get a slight bonus as the one choosing the role). You have to weigh up what you need with how much it might benefit or disadvantage your opponents. Every decision feels weighty – when to ship your goods, what goods to produce and what role to select, amongst so many others.

Though it’s not without it’s faults – the game is finicky to set up and can take a fairly long time to play – these are minor inconveniences for such a wonderful game. It’s no surprise that it ranks amongst a lot of people’s favourites (it certainly does mine), and if you enjoy a game with a lot of strategic thinking, then this is a must have for your collection. As you may be able to tell, I’m in two minds about the game in general, and Mr. Geekess is pretty sold. There are certainly good aspects to it, things that make it great fun to play, but the negative aspects stop the game from featuring in my top picks (though not in his). Have you played it? What did you think?